I realized today I really love Crate & Barrel, IKEA, World Market, and all the other seemingly soulless, big corporate furniture peddlers. And that “vintage” is just all that stuff but older. And used. And almost always uglier.

Sun coming up (as seen from our window)

First, we started with an amazing day. I believe January in Portland has been awesome. Yes, it rains quite frequently, but I can handle rain if it’s 50 degrees. Today we were lucky enough for it to be 50’s and sunny as can be. (I didn’t even wear a coat!) And there’s lots more of that coming – hooray!

We decided to make use of the lovely day by doing some furniture shopping for the new place. We could use a dresser, and being inspired by the Novogratzs, we thought we’d be cool, artsy, and money-conscious and try to snag something “vintage.” Jeff assembled a list of a bunch of 10+ vintage shops around Portland, and we set out with Cooper along for the ride. Oh, and we started with lunch at ¿Por Que No?, which was a-mazing!

Of course, all the vintage shops we visited were in the Northeast and Southeast neighborhoods of Portland, which are quite trendy in a hippie/artsy sort of way. They seem to really like Tibet and patchouli in some of those neighborhoods. Little sketchy sometimes, but there are some of the coolest restaurants, shops, and dwellings there. We hit places like ReFind Furniture, Bella Norte, Porch Light, Reviva!, Rerun, Vintage Pink, House of Vintage, Lounge Lizard…some closely resembling Salvation Army stores, and some really fun retro spots. (Old Playboy magazines seemed to be a common product offering.) We inspected dozens of dressers to no avail. We also looked at rugs, lamps, and chotchkies. Uninspired and feeling totally un-hip, I realized “vintage” might not be our thing as much as we wanted it to be. 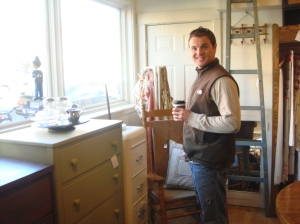 So we paid a quick visit to West Elm on the way home. Now THAT was inspiring. 🙂 No dresser for now, but it all made for a lovely little day exploring exotic locales in our new city.

Me in Vintage Pink on Hawthorne