If there’s one thing Jeff and I like, it’s a good sports match. If there are two things, it’s sports and food. Three things – sports, food and enjoying beautiful weather. Luckily we got some of all three this weekend.

We kicked off our weekend with a trip to the flagship Portland Farmers Market, which is celebrating its 20th fabulous season at Portland State University. We don’t even buy much; we just love to stroll through the city blocks full of produce, baked goods, seafood, cheeses, flowers and more. 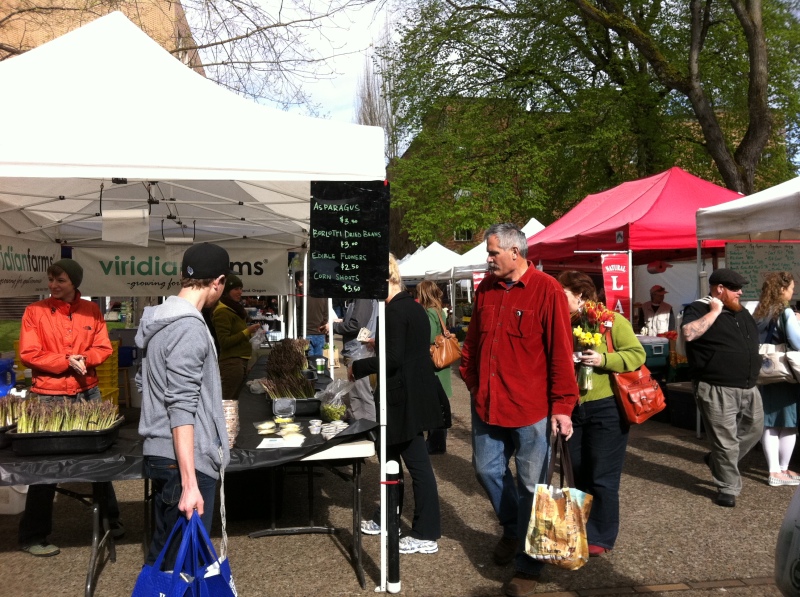 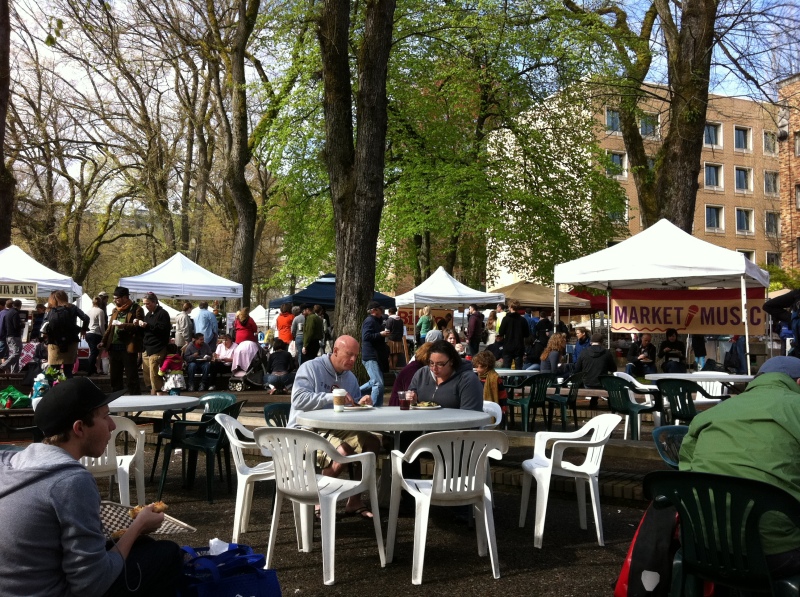 Saturday evening, we paid a visit to Jeld-Wen Field, home of Portland’s new Major League Soccer team, the Timbers. We bought some reasonably-priced tickets from Craigslist since the season sold out almost instantly. It was the Timbers’ third home game – probably the first without torrential rain – although to be on the safe side, we had opted for second-level seats UNDER the partial roof. It was quite the experience. It was technically my first professional soccer game, so it’s hard to tell if this is the norm, but it was a raucous good time. The huge “Timbers Army” cheered nonstop throughout the 90 minutes of play. And they have the absolute best mascot ever: Timber Joey. The ginger-bearded Timber Joey actually walks around the stadium revving up his chainsaw, then when the Timbers score, he saws off a slice of a huge log on the sidelines. Epic. Every time he walked by us I got so worked up I couldn’t catch a good photo. So I found one online (see far below). 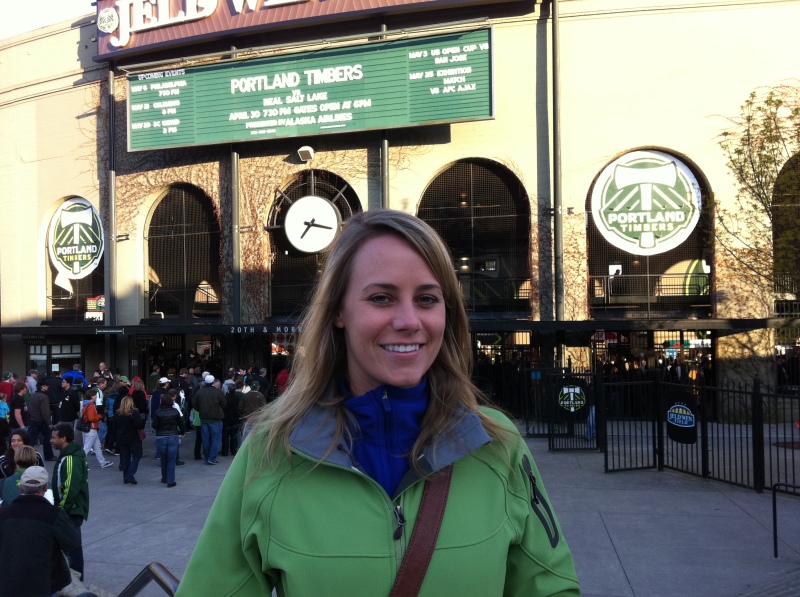 Sunday was Park Day in our building. The weather was amazing, so our landlords organized a little outing at the dog-friendly Fernhill Park across the river. We packed some snacks, our traveling cornhole game, and Cooper’s beloved Frisbee, and met our building-mates at the park for a few hours. Once we got our fill of lounging, our neighbors Daniel and Lindsay introduced us to a wacky little place called Kennedy School. McMenamins, who practically own the bar scene around Portland, made an old elementary school into a mishmash of bars, a hotel, a theater…ah, only in Portland. Plus, Kennedy School was hosting some sort of May Day celebration, so there were kids and bands and all kinds of craziness going on.

On top of it all, we’ve been churning out some baked goods here in the Krass household. I get the urge to bake, or Jeff gets the urge for cookies, and we hop to it. This weekend, we made some yummy banana bread (recipe here) and chocolate chip cookies (recipe here – plus we sprinkled sea salt on top of them!).

What a good weekend! 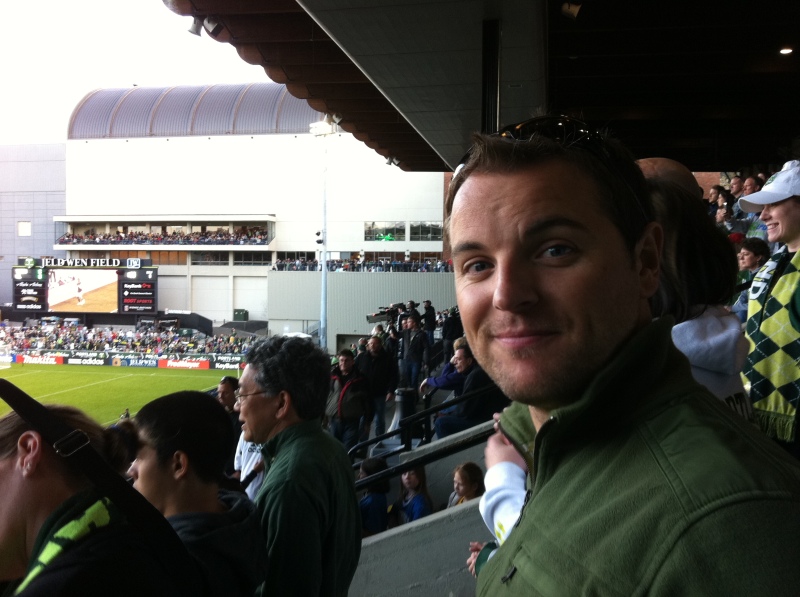 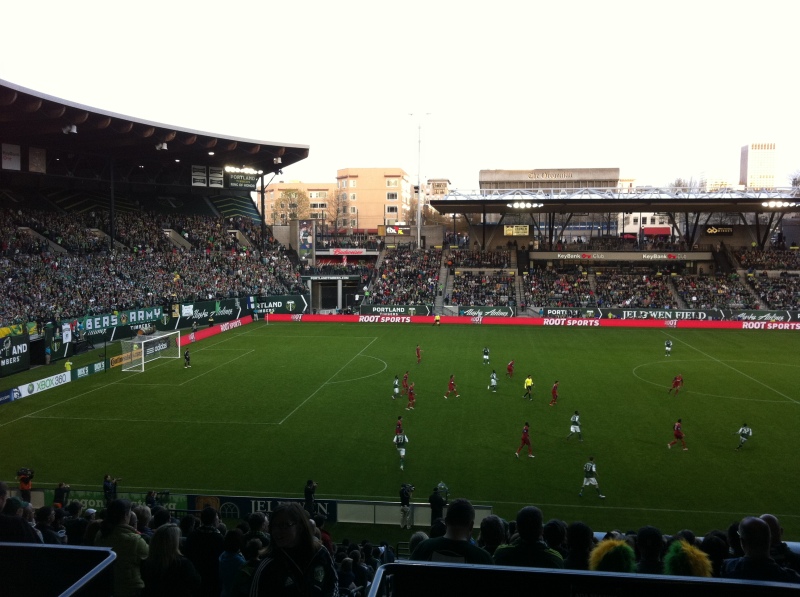 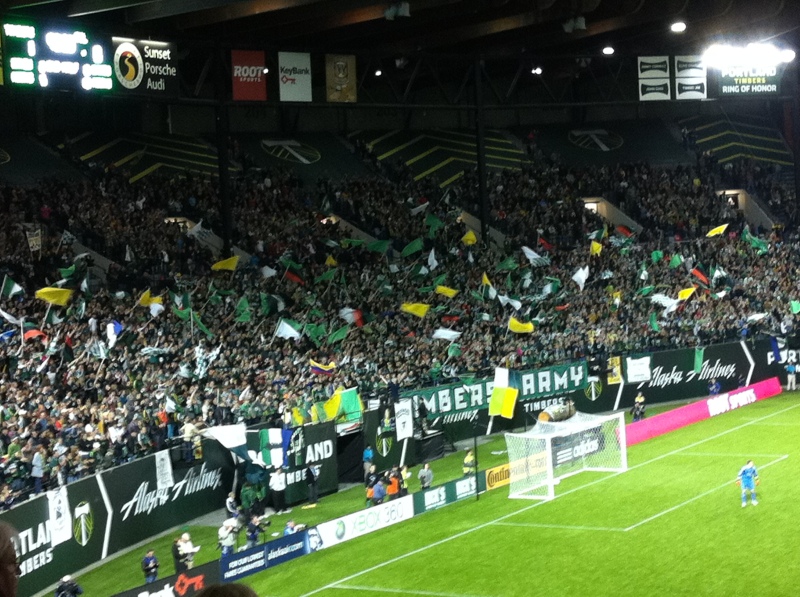 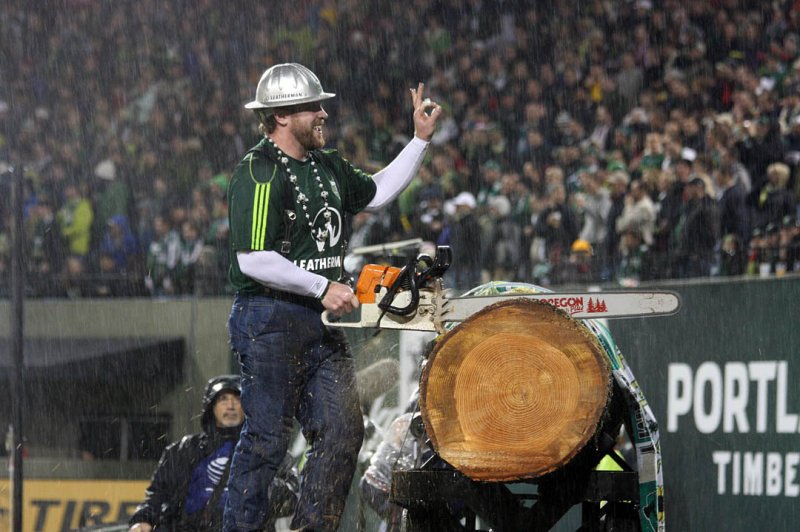 Timber Joey at a rainy game (not our game and not my photo!) 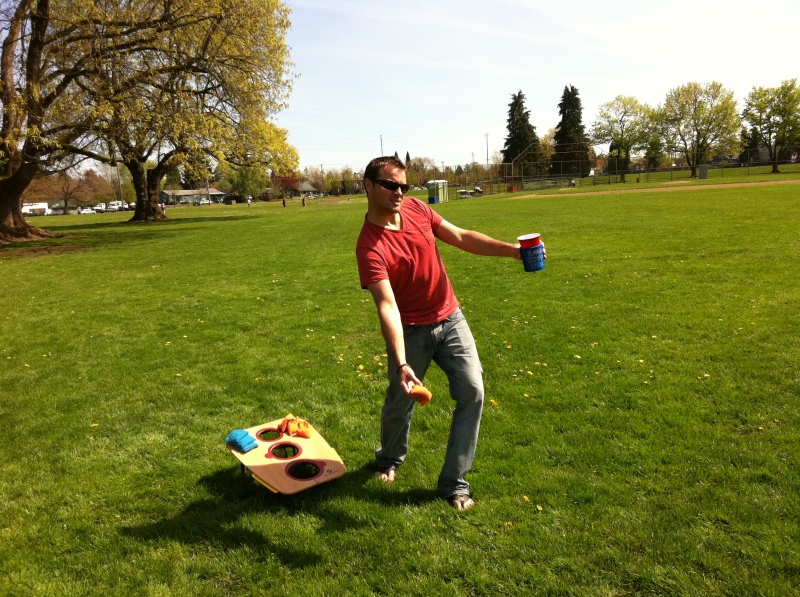 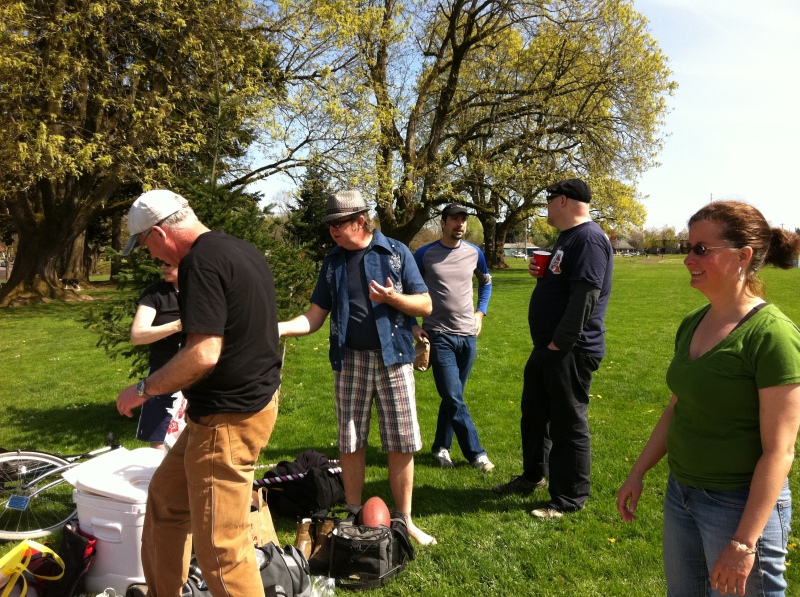 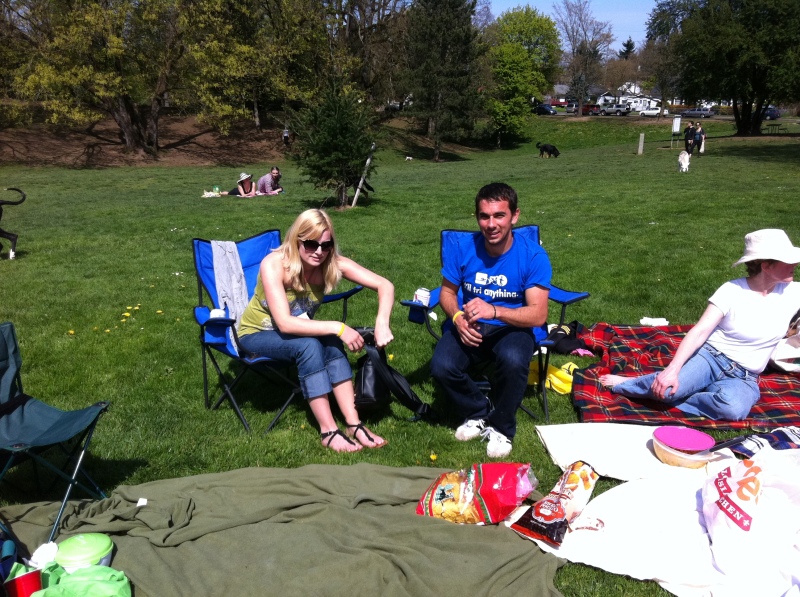 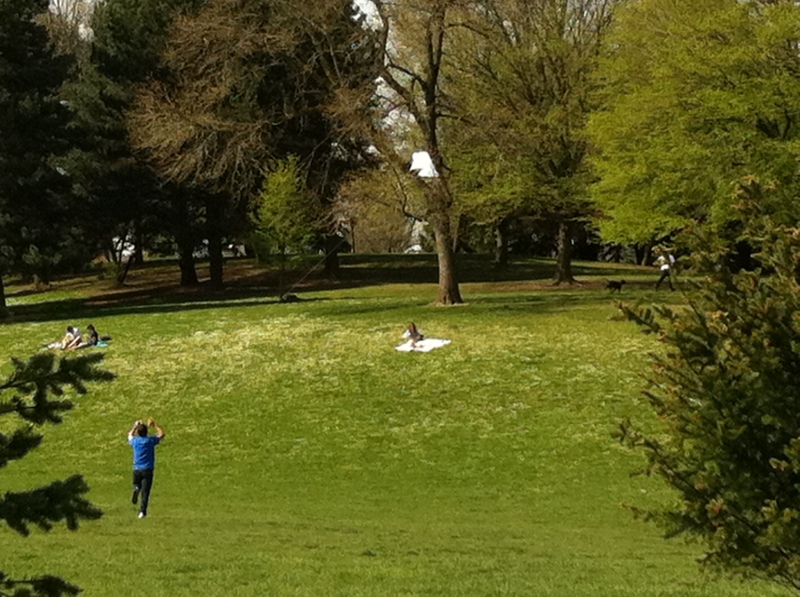 Daniel flying a kite at the park (lol) 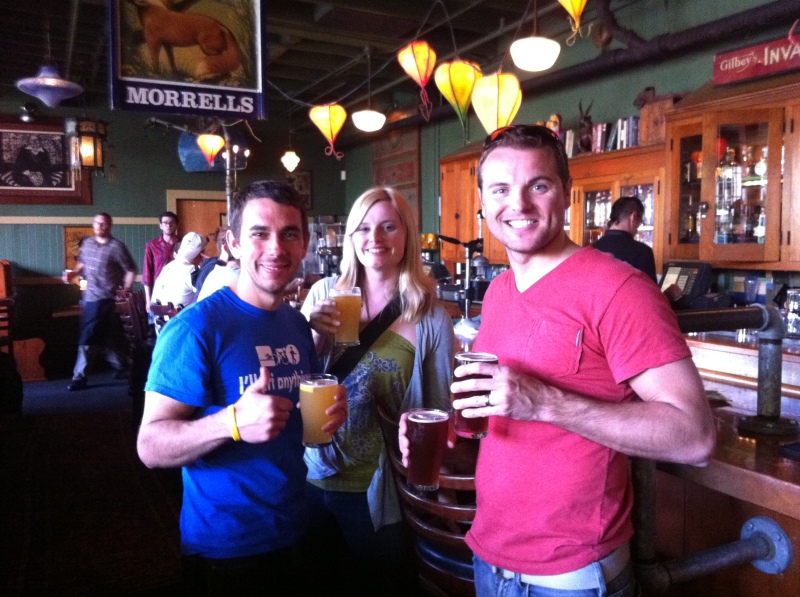 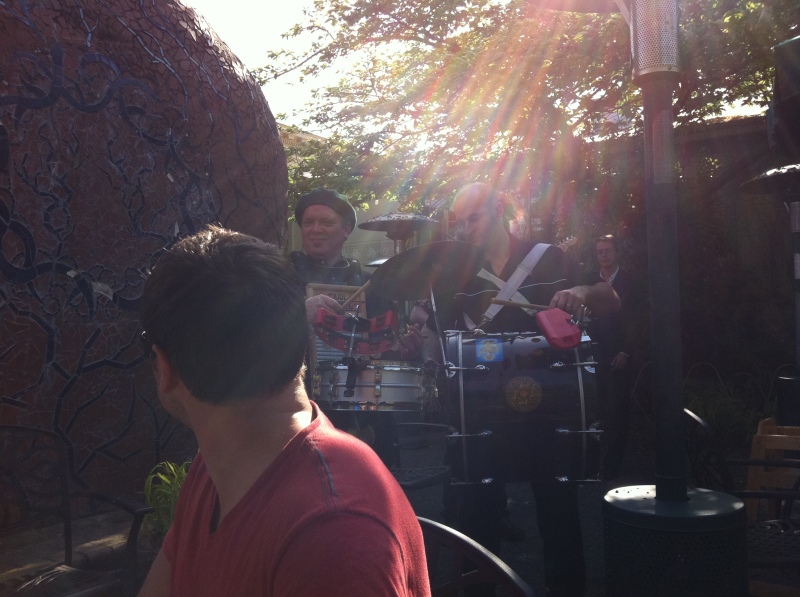 The traveling band in the courtyard of Kennedy School