The last two weeks have been nutty, mainly for one reason: Nike U.S. Open of Surfing. I got the fabulous opportunity  to head to Huntington Beach, California, to report (write stories) on the nine-day event for Nike employees. I flew down for four days of behind-the-scenes access to what I now think is the coolest event ever. More than 750,000 people on 14 acres of Pacific Ocean beach. A high school fashion design show, a skateboarding bowl, a BMX contest, and of course, the surf competitions. Needless to say, I had a ball.

Downside: I was running around alone and didn’t catch pictures of everything, so I added in a couple professional photos from the event (obviously I wasn’t in a helicopter snagging aerial shots!).

Where do I begin? First, I got to hang out with my Cali cousin Rebecca – who I haven’t seen in maybe 10+ years – and her funny coworkers at some VIP party for a surf movie premiere (Lost Atlas). It was at the Shorebreak Hotel, where a lot of athletes and big shots stayed and the site for all the cool after hours parties. It was so nice seeing her!

I hit a lot of Nike’s new product PR events, which included action sports athletes like surfing world champ Carissa Moore, snowboarders Danny Kass and Annie Boulanger, and my fave, skateboarder Paul Rodriguez. Major highlight: I got to interview P-Rod for a story – and he was SO cool. So down to earth. Got to interview him in a quiet catering kitchen area behind the scenes at one of the parties. And what a chatterbox he was. Just a funny, memorable experience.

I also interviewed high schoolers backstage at the Hurley Walk the Walk fashion competition. It was hosted by celebs Vanessa Hudgens and Tristan Wild, and judged by Victoria’s Secret model Marisa Miller, surfers Rob Machado, Laura Enever and others, P-Rod and a bunch of other folks. While doing my reporting I had a near-devesastating experience: I lost my phone, my lifeline to my email and the world. Luckily a guy backstage found it before it password-locked and immediately called my mom, who helped him find his way to me. Thank heavens! Lesson learned: put a contact name and number on the outside of your phone.

During the days, I bounced from sport to sport, watching the Converse Coastal Carnage skateboard competition, Nike 6.0 BMX jam sessions, and the surfing competitions. All right on the Pacific Ocean, all overrun with tan teenagers in bikinis, boardshorts and trucker hats, covered with temporary tattoos from all the U.S. Open booths. Since everything at the U.S. Open was free, you could tell it was the hot spot for young, broke Cali kids who wanted to hit on one another. 🙂 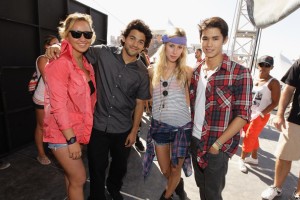 Every evening, there was a free concert on the beach. Swarms of teenagers jumping around. One night was The Sounds, next was Jimmy Eat World and Dead Country, and the next, MGMT and Surfer Blood. For headliner MGMT, the beach was a zoo, I almost got freaked out by how busy it was. Running around alone was cool besides times like that, although I managed to ride the flow of the crowds to a VIP area that was a little less frenzied. Awesome shows though.

This probably sounds like a relaxing time, but it was pretty intense. Most of the time I ate just one main meal a day. And I got a boatload of walking in, trekking across that 14 acres of sand or between my Hilton room and the beach. I thought I’d maybe come back a pound or two lighter but unfortunately that wasn’t the case!

I could go on and on. Lots of stories. It was such an excellent time, and really made me love action sports and made me grateful to Nike for sending me. And now, today’s my first day off of work in two weeks, so it’s time for me to relax! 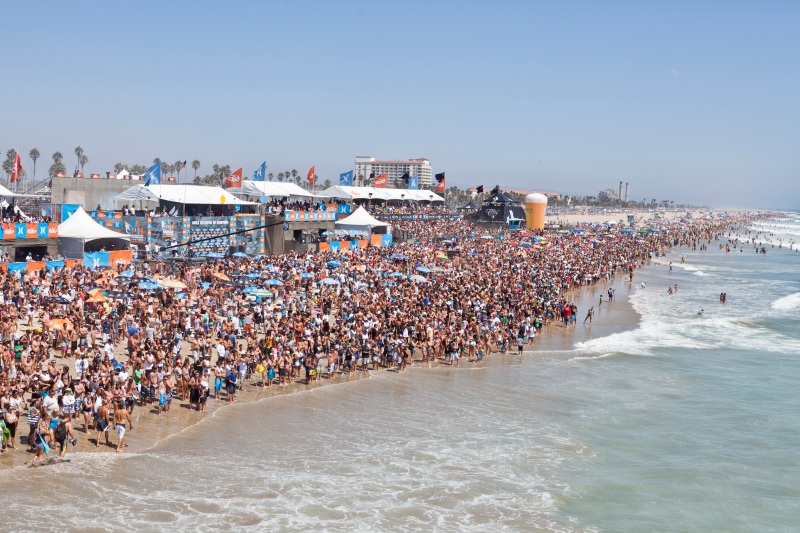 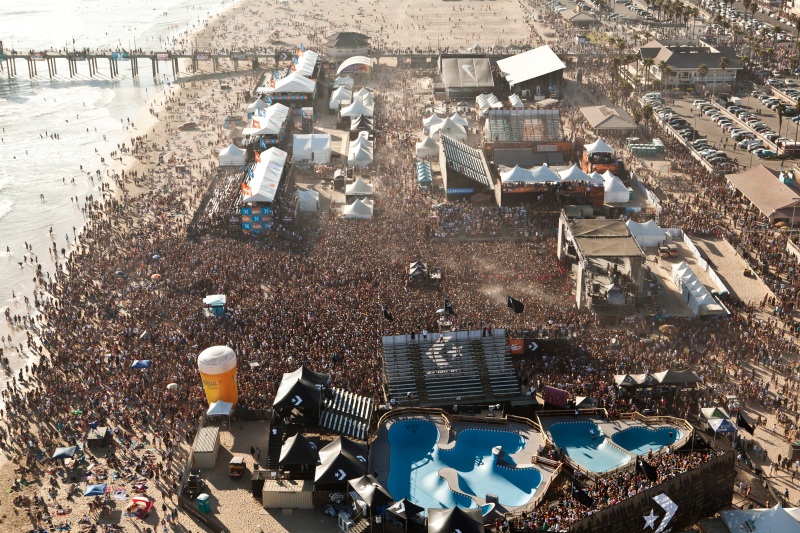 The swarms of people watching a concert at the U.S. Open

View from my perch at the MGMT free concert – madness! 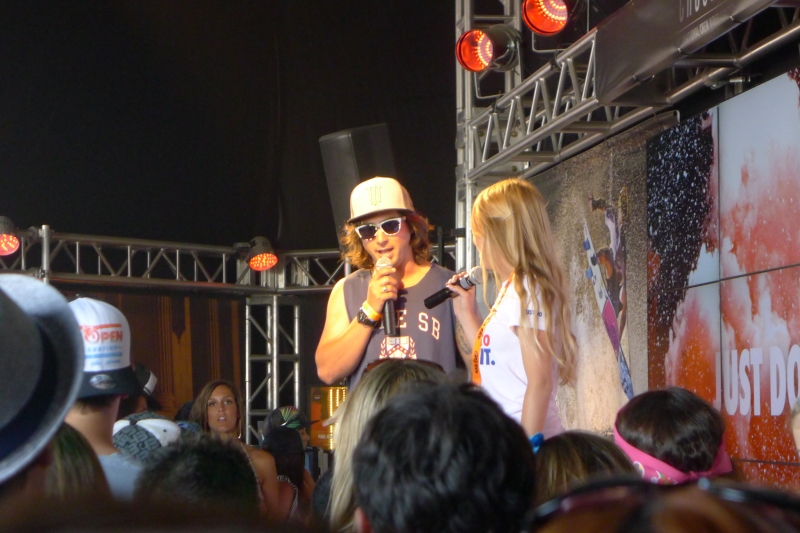 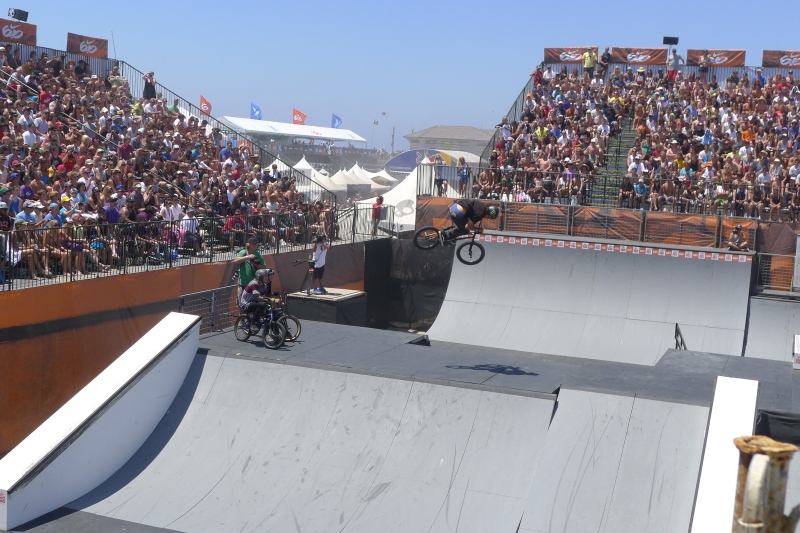 Tony Hawk even showed up at the Coastal Carnage! 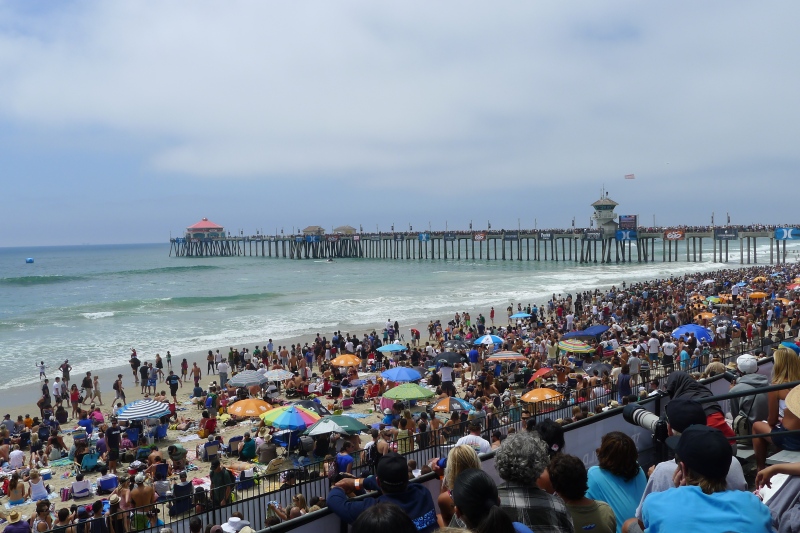 Watching the surfing finals on Sunday