Last week, Jeff and I got a taste of the impending London Olympics. On June 21, Nike – for the first time ever – hosted an official U.S. Olympic Trials event on campus. The event: hammer throw, which surprisingly doesn’t involve real hammers but heavy balls on wires. Thousands of people turned out to watch, and Nike employees drifted from their offices to grab some lunch and watch the best hammer throwers in the country duke it out for a spot on the U.S. Olympic team. Nike athletes Amber Campbell and Kibwe Johnson came out on top (check out some great pics of them here).

Sunday, Jeff and I continued our Olympic Trials experience by driving down to Eugene – where we visited back in March – for a day of U.S. Track & Field Olympic Trials. The hammer throw was the kickoff to 10 days of competition (which continues through tomorrow), and lucky us have it practically right in our backyard!

But sandwiched between our days of Olympic fun was a perfect Friday evening in PDX. It was free admission Friday (saving us $30) at the Portland Art Museum, which has been on my must-see list for months. After a quick spin through the four stories of displays, I snagged a decadent hot chocolate at a little gem of a shop nestled next to the Heathman Hotel, Cacao. We then met up with our partners in crime Lindsay and Daniel, and trekked over the Morrison Bridge for dinner at perennial-favorite Bunk Bar. We then discovered where all the cool kids hang out in Portland: Dig a Pony. Packed, with a totally cool vibe. Yet somehow we were still antsy and proceeded to bar hop to Slow Bar and Star Bar before cabbing back home at an impressive 12:30 a.m. (I barely see the likes of 10:30 p.m. nowadays. :))

Back to Olympic Trials – Jeff and I got to Eugene early so we could grab a pint at Wild Duck Cafe (home of the yummy “Chips Kelly” homemade potato chips) and catch the Euro Champs soccer game between England and Italy. Then, we hiked over to Hayward Field, the storied track at the University of Oregon where the Olympics Trials are being held. We caught the finals for long jump, discus throw, shot put, 100m and 400m. Lots of Nike athletes sporting the super-cool Nike Pro TurboSpeed pieces, and lots of top-three finishes, from Sanya Richards-Ross in the women’s 400m to big boy Reese Hoffa in the shot put to LaShawn Merritt in the men’s 400m. It was so cool witnessing such life-altering moments for so many hard-working athletes. And a bonus as we were walking out – we caught a glance of the newly-minted “world’s greatest athlete” Ashton Eaton, who’ll no doubt be a U.S. Olympic team poster boy for his world-leading decathlon performance.

The best news of all: I’ll get to see a lot of these athletes again in London, since I recently was given the amazing opportunity to work on-the-ground at the second half of the Olympics. I am absolutely, positively stoked, realizing I’ll be working my butt off – but of course it’s 100 percent worth it to get the chance to attend such an amazing event. In London (a first for me). Can. Not. Wait.

Jeff happy for a sunny day at Hayward Field

William Claye on the long jump (he finished 2nd) 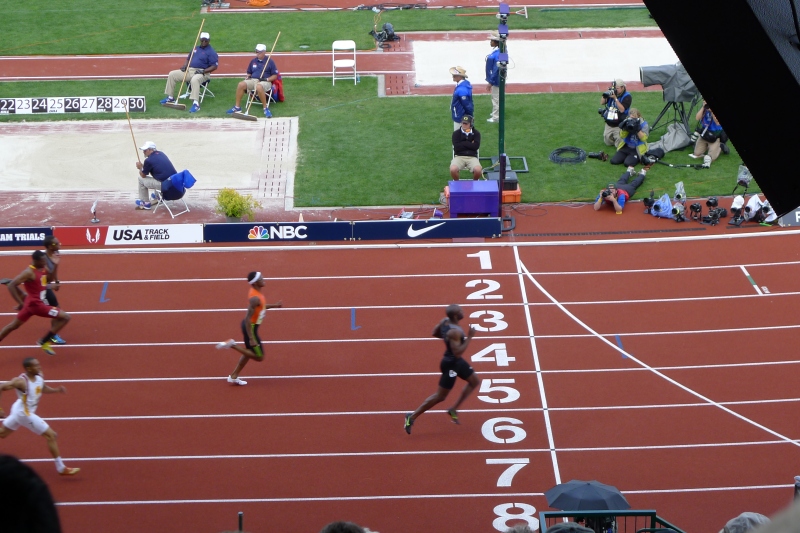 The finish line for the men’s 400m 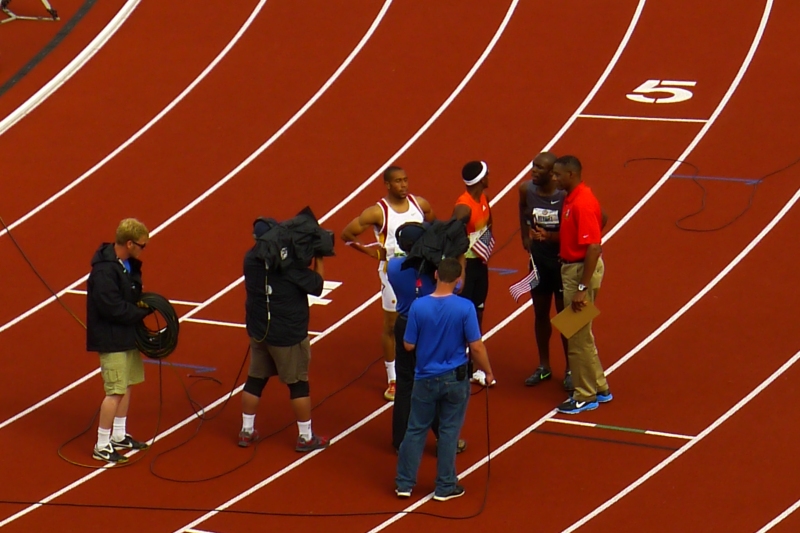 Getting limber before the 400m 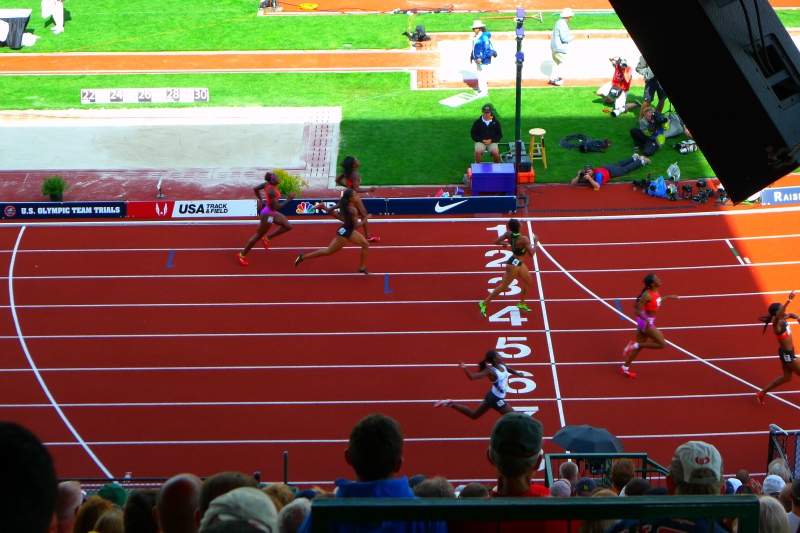 The finishers of the women’s 400m dash 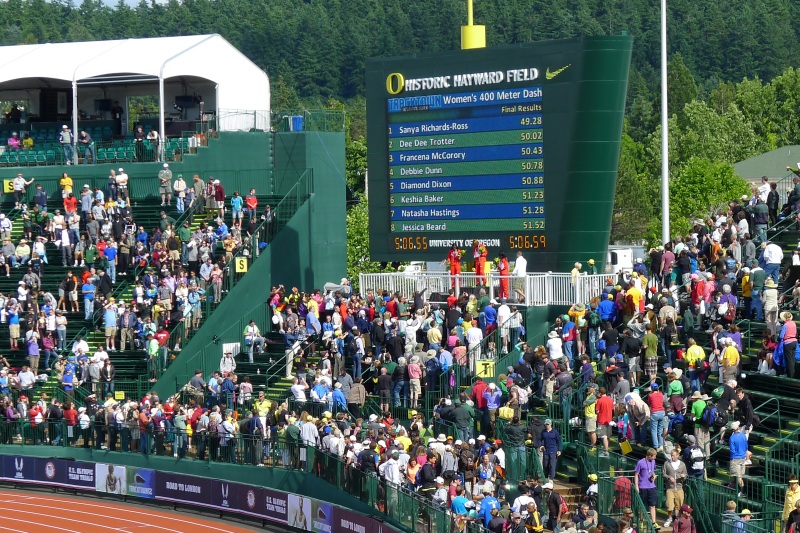 The festival (and plenty of Nike displays) behind Hayward Field 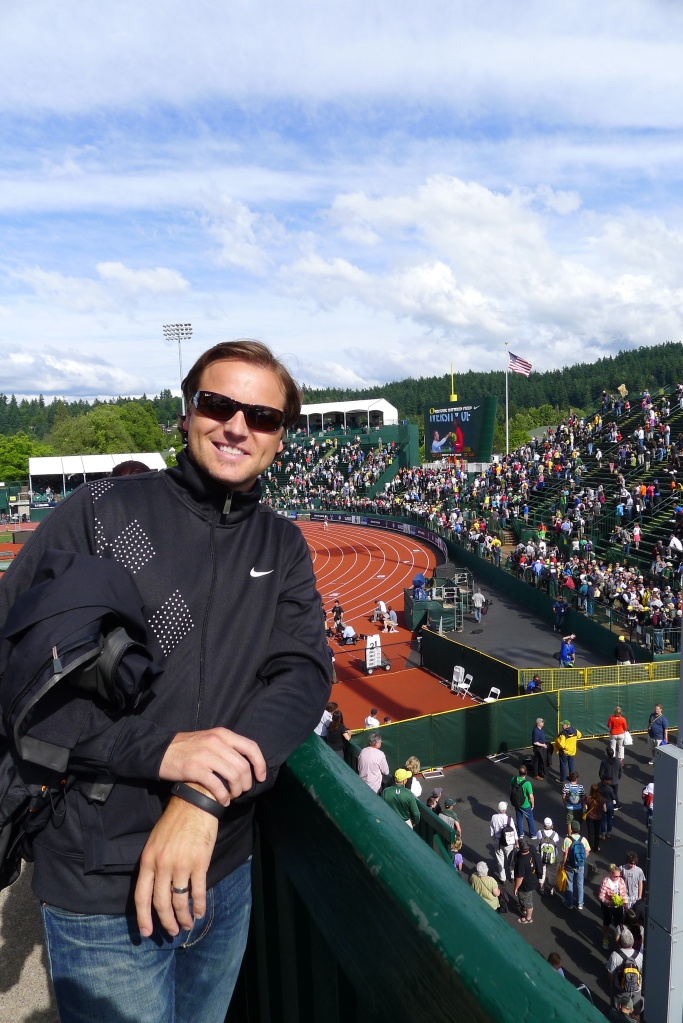 A great day in Tracktown, USA!