Happy Halloween! The holiday is near and dear to the hearts of the residents of our building. Who doesn’t love an opportunity to dress up in goofy costumes, eat massive quantities of candy, drink seasonal brews and deck out the place with hand-carved pumpkins? 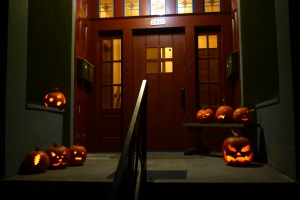 Getting in the spirit!

Lindsay spent her 31st birthday at yoga teacher training so when she returned, the eight residents of our building greeted her with a surprise birthday/pumpkin-carving party. My pumpkin was lame – I tried a Pinterest idea and hammered cloud-shaped cookie cutter shapes into the shell, which totally wrecked the cookie cutters. Plus the design was totally uncreative. Jeff’s pumpkin looked like an emotionless Lego person head. Everyone else’s pumpkins looked great though!

The Friday before Halloween, Jeff, Lindsay, Daniel and I hosted a little shindig at the place as well. Thankfully, the weather cooperated with mild, 50-degree temps and no rain, and a bunch of folks turned out to play beer pong, chat around the fire and listen to too-loud music (prompting a visit from police asking to turn down the volume) into the wee hours of the morning. It’s times like those that make me so appreciative of the great people we’ve met here in Portland – co-workers and book-clubbers, neighbors and friends-of-friends.

And I must say, our costumes were pretty epic. KISS. I was Starchild/Paul Stanley and Jeff was The Demon/Gene Simmons. We ordered Jeff’s costume online, and I pieced mine together from eBay, Amazon.com, H&M and Spencer’s. After spending an hour on makeup, even our parents were hard-pressed to recognize us in photos!

As for the actual holiday, we carried out a Northrup building tradition by ordering Pizzicato pizza and enjoying a couple of seasonal beers as we doled out candy to trick-or-treaters by lowering a basket down from our perch on the front balcony. Our friend Becky even brought some dry ice for some smoky atmosphere. The kids and parents love the basket of candy descending from above! It’s amazing how a little gimmick like that can bring a smile to so many people’s faces. 🙂 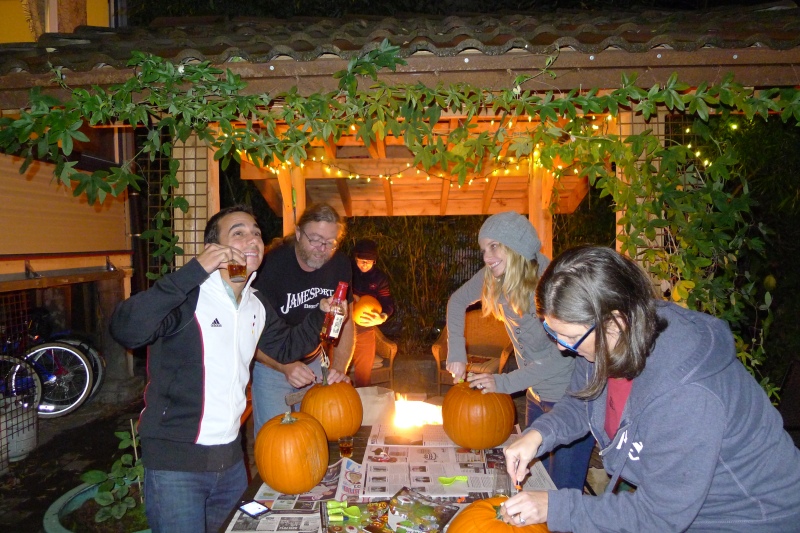 Pumpkin-carving party in the backyard! 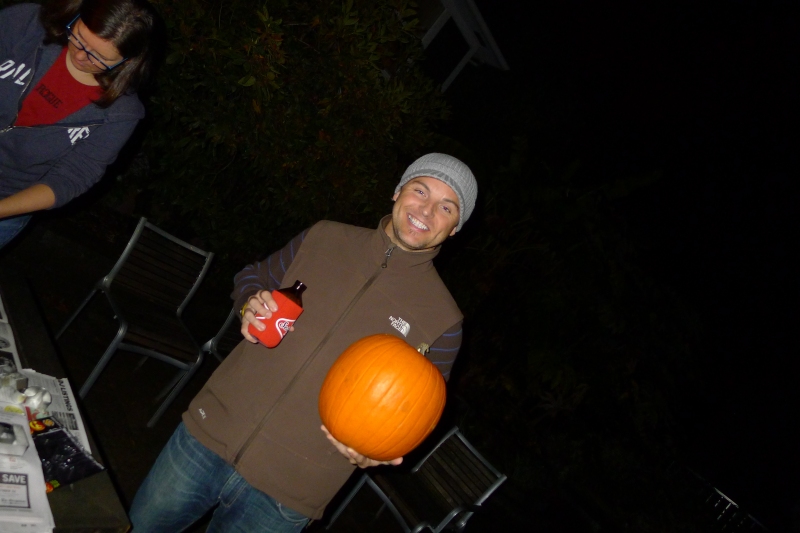 Jeff contemplating his design ideas for his pumpkin 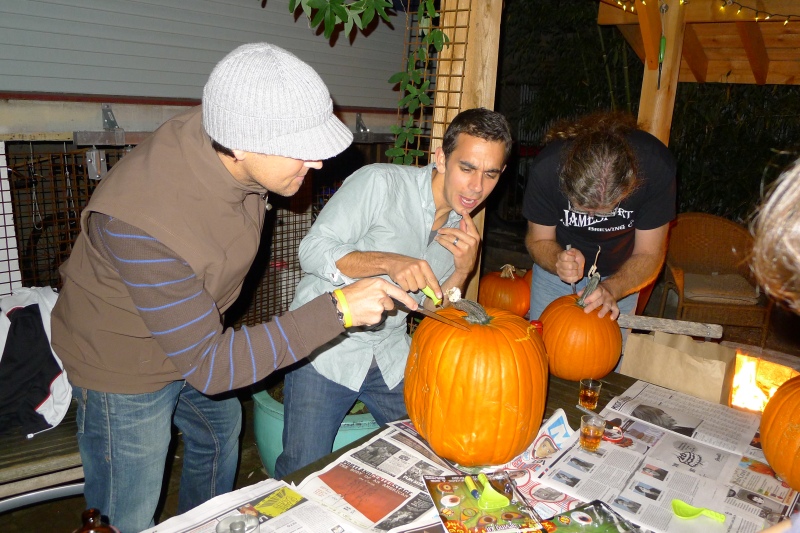 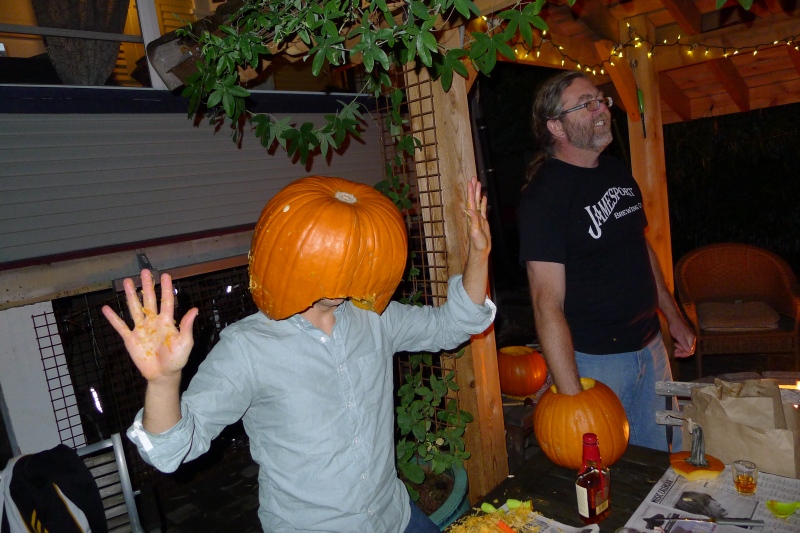 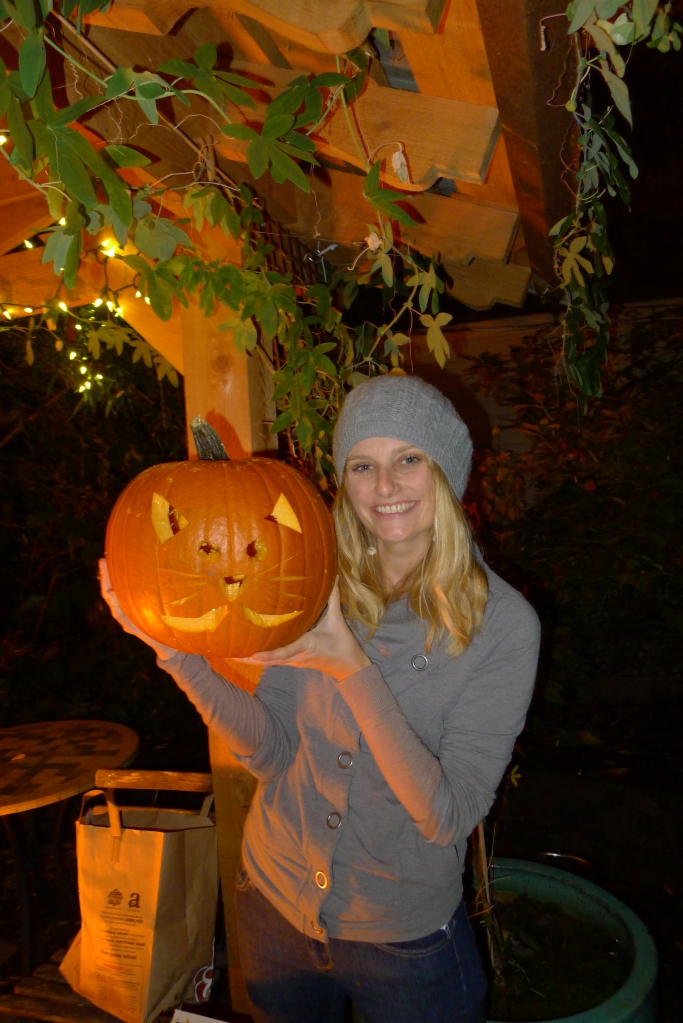 Lindsay and her kitty pumpkin 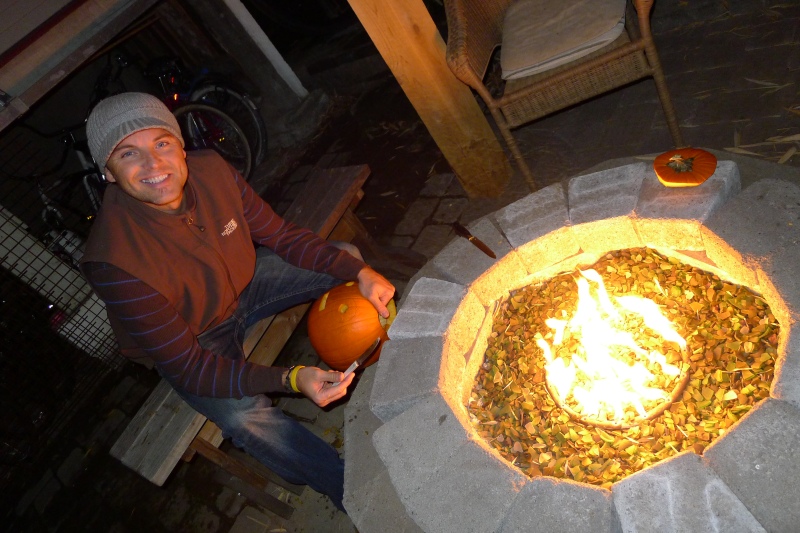 Working by the light of the fire 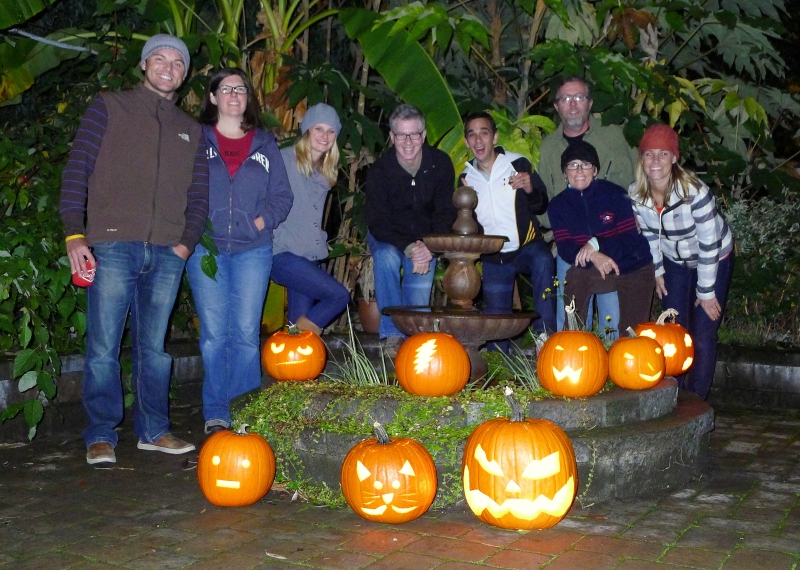 The Northrup family displaying their handiwork 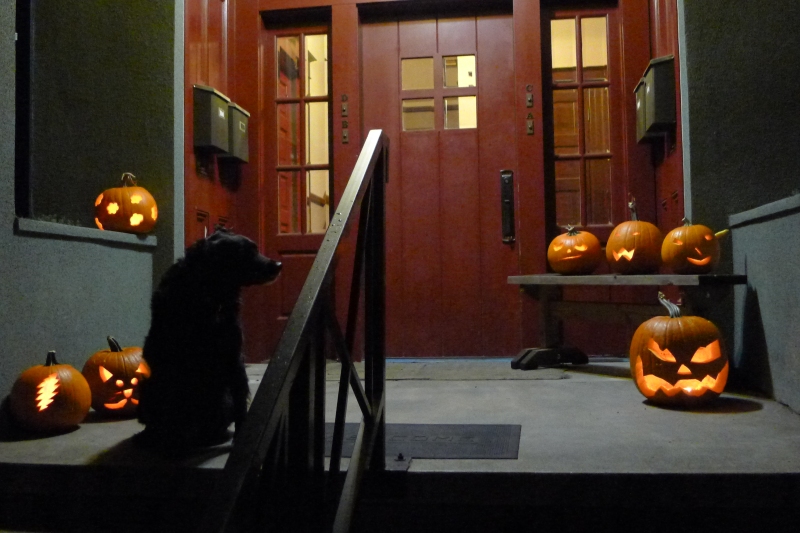 Cooper surveying our work on the front porch 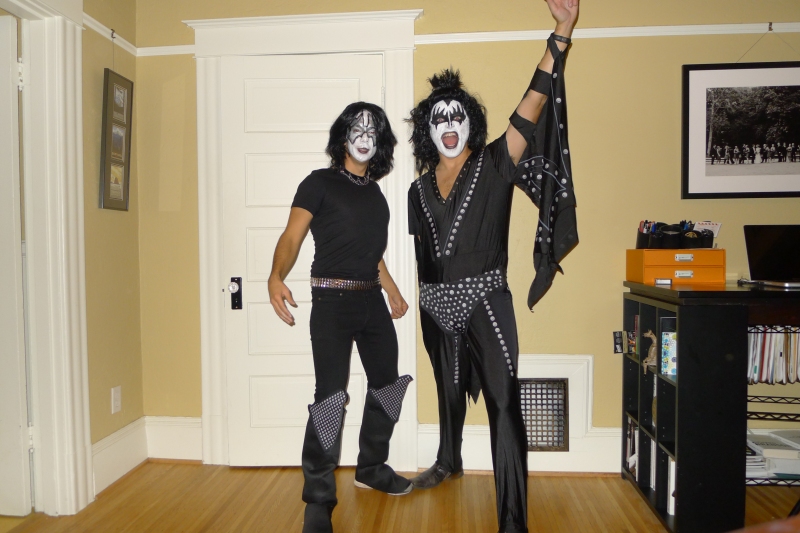 Spaceman and The Demon, aka Daniel and Jeff 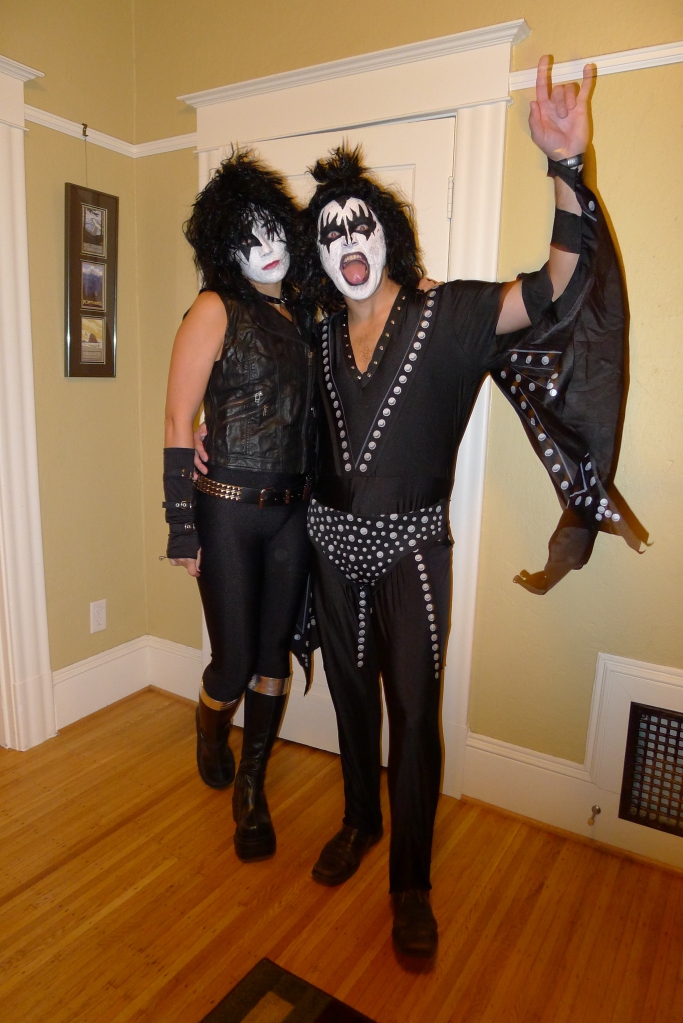 Jeff and me…such a lovely couple… 🙂 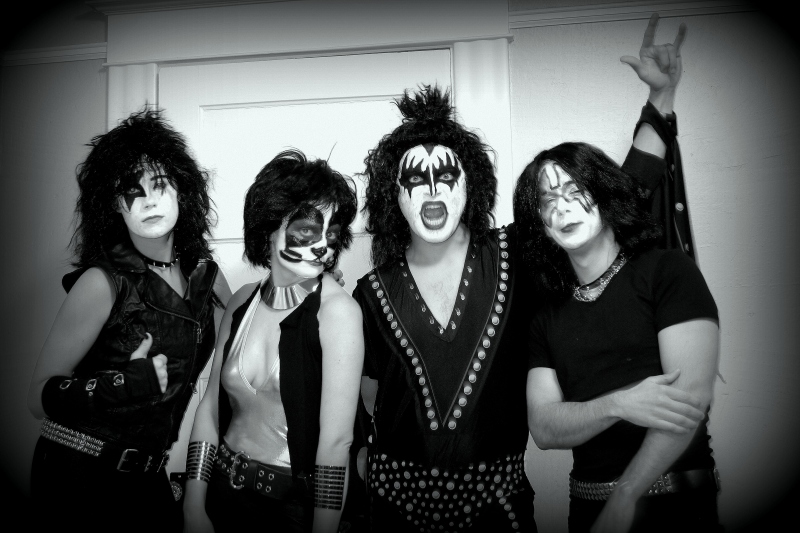 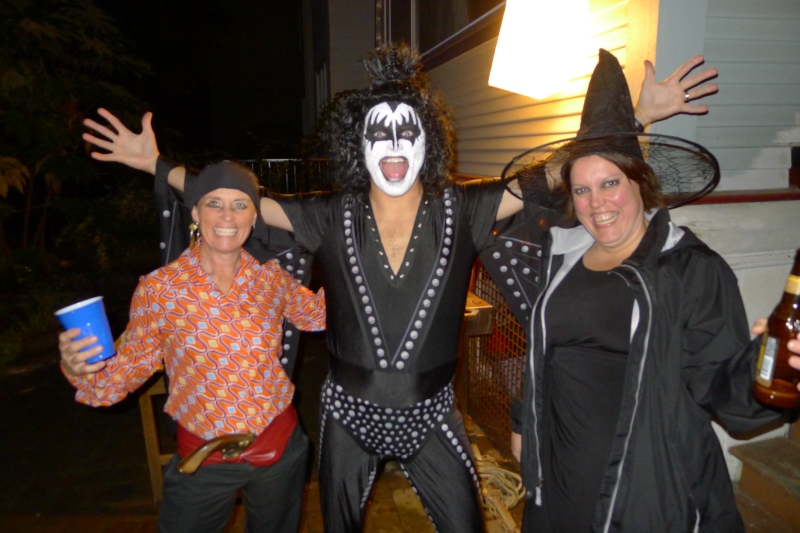 Kim the pirate, Jeff the ham and Aubrie the witch 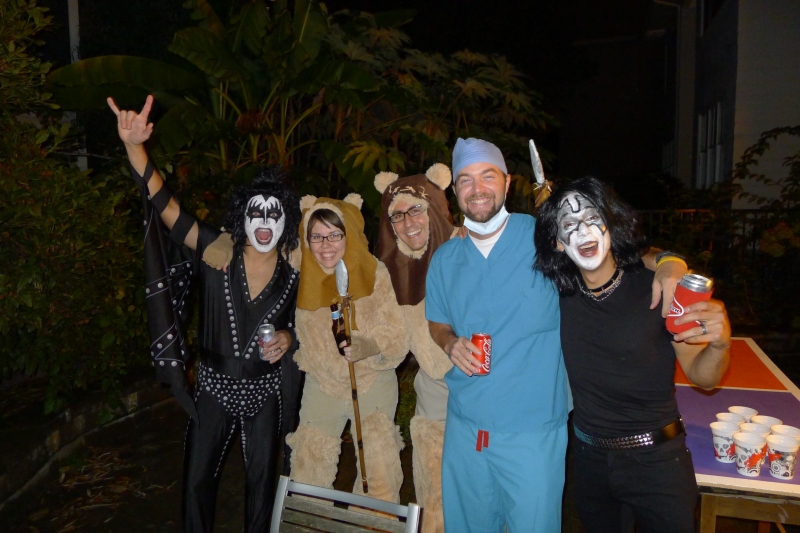 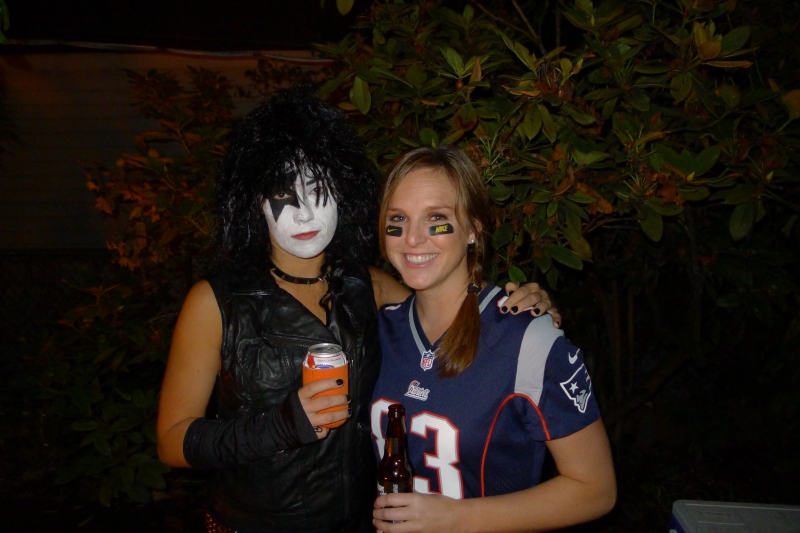 Me and Kristen (otherwise known as Wes Welker)

David with his borrowed mask and his wife Aubrie 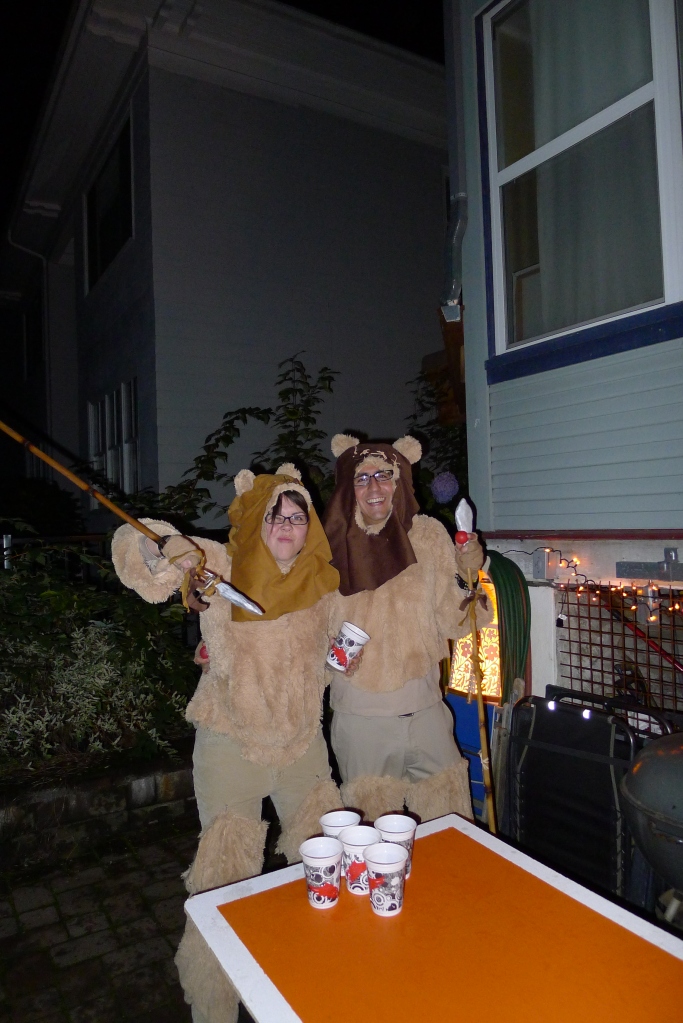 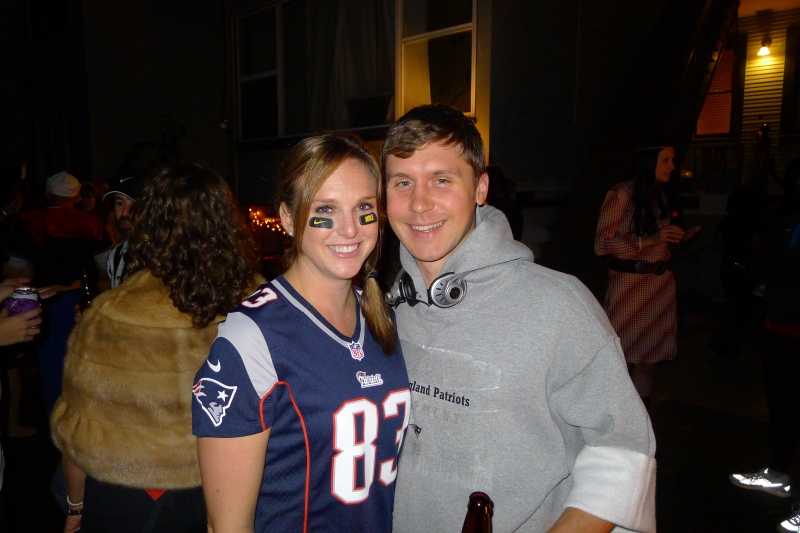 Kristen cozying up to Bill Belichick 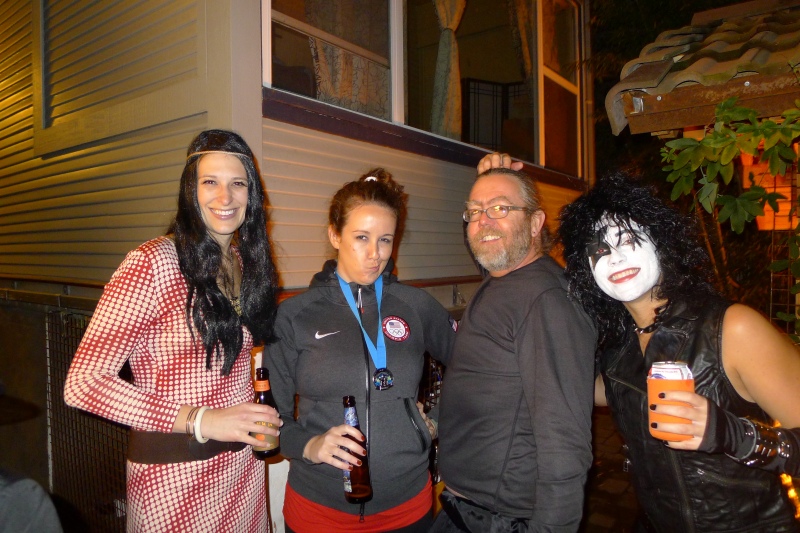 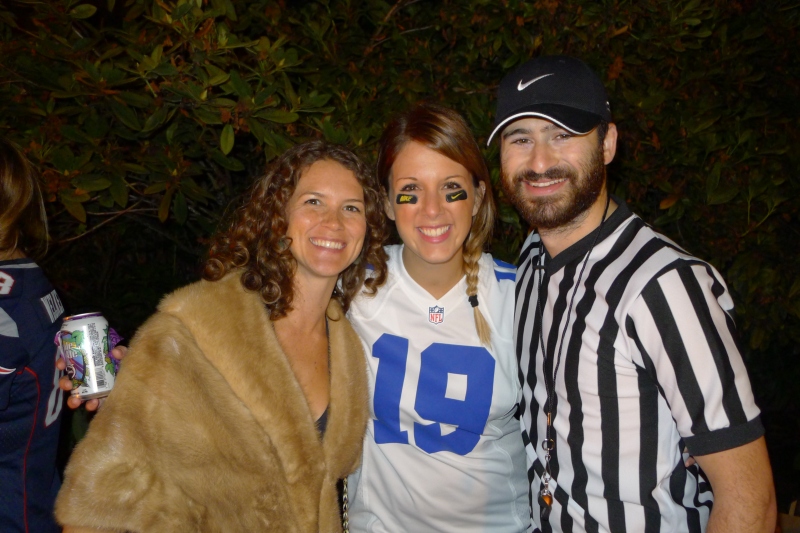 Jessica the social climber, Keeley (aka Miles Austin) and Rick the ref 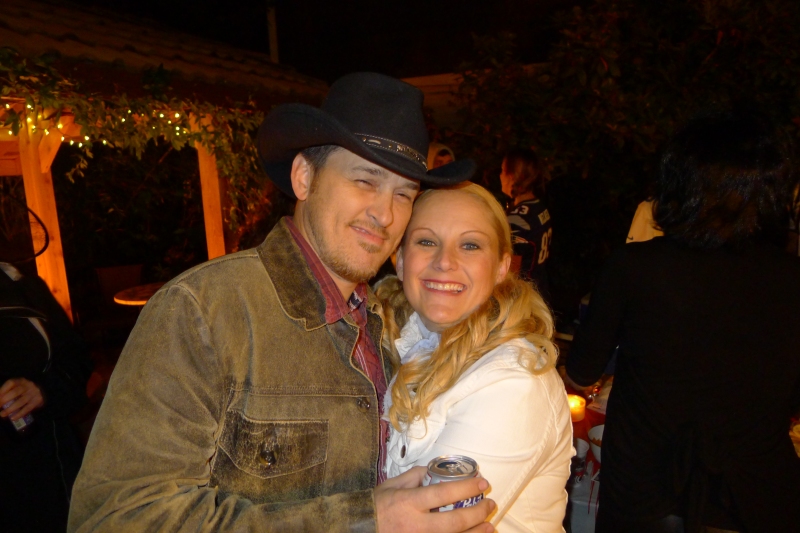 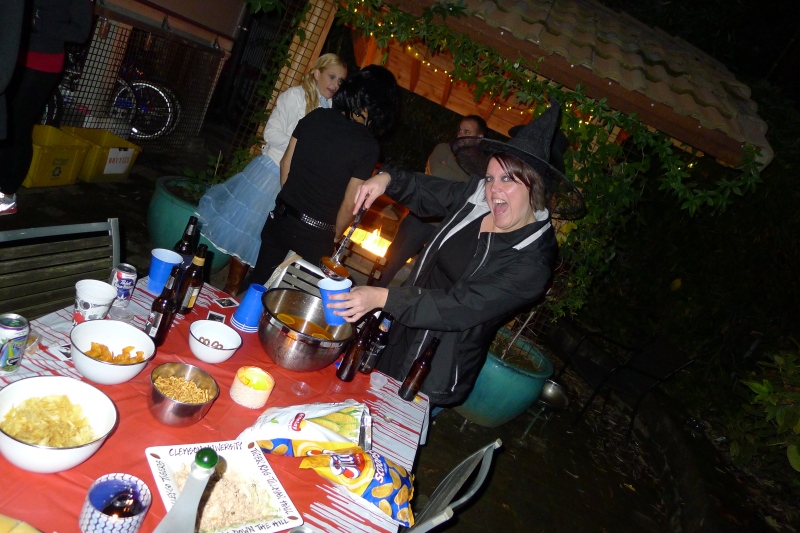 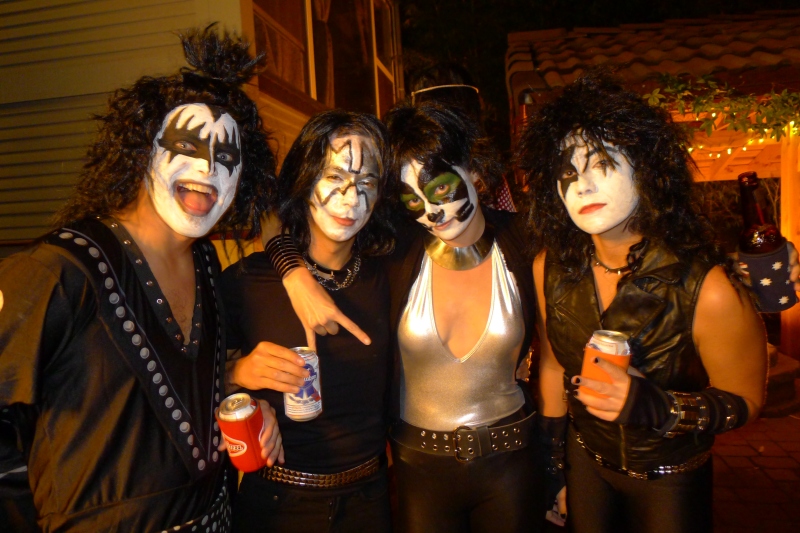 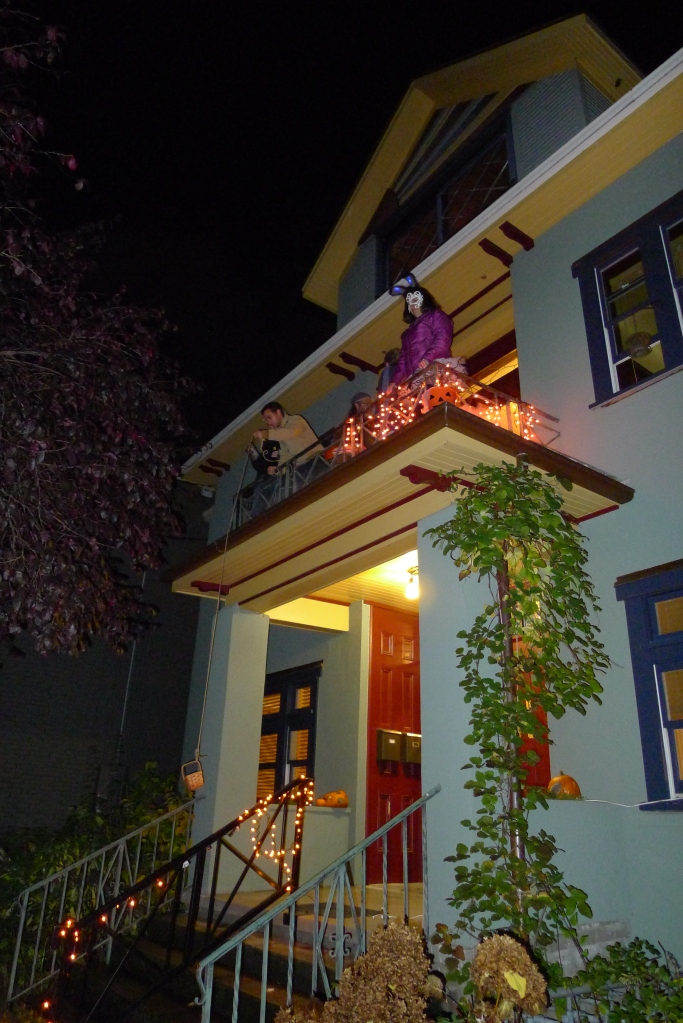 Lowering the Halloween candy basket from the front balcony 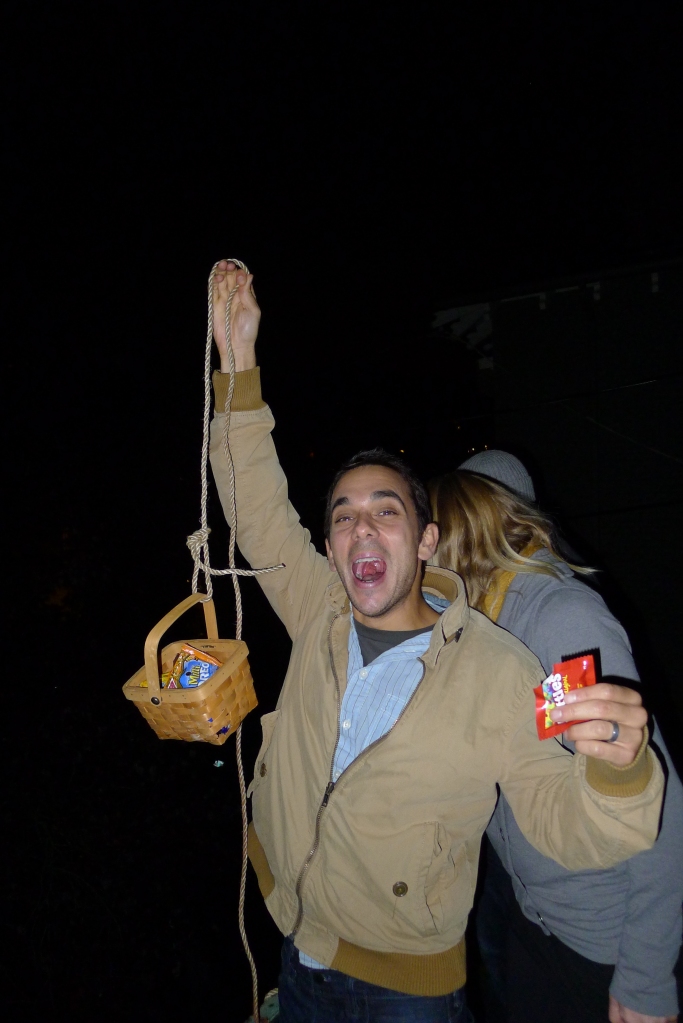 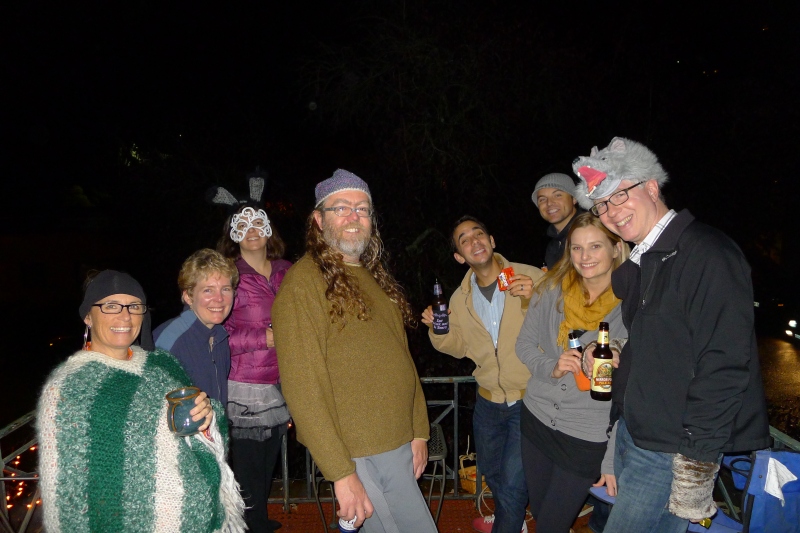