Visitors make me so happy. Not only do we get to spend time with some of our favorite people in world, but we also get to pack in a boatload of exploring! Last weekend, Jeff’s parents came to town – their third trip to the Rose City after their Oct. 2011 visit, Chris’ April 2011 visit and Bob’s Jan. 2011 visit (our first visitor in our new city).

With this crew, y’know we hit some bars and restaurants. We commenced the extended weekend with a Thursday night dinner at the newly-opened Southland Whiskey Kitchen, a Northwest neighborhood BBQ joint that serves divine pulled pork sliders. I’m salivating just thinking of those darn sliders. After work on Friday we stayed close to home again, stopping by bottle shop Caps & Corks, grabbing pints at Deschutes Brewery, and capping the night with wood-fired oven pizzas at Oven & Shaker – all with our neighbor buddies Lindsay and Daniel, who had Daniel’s identical twin brother Aaron in town from Chicago.

Then our adventure in the great outdoors began! We – and that “we” includes Cooper – spent Saturday at the coast, making our first stop at Cannon Beach, which had crazy gusty winds and misty rain galore. (What a difference from my crystal-clear Cannon Beach visit with my friend Lesley a few weeks ago!) We caught the Michigan State/Nebraska game at Manzanita’s San Dune Pub, a perfect small-town bar with tasty food and a cozy fireplace to dry our damp clothes. Then it was on to Oswald West State Park, where we hiked a half-mile through monster trees and over rickety bridges to Short Sand Beach. Despite the POURING rain, it was amazing. It felt like a hidden jewel, desolate besides a few hardcore surfers braving the big waves. We warmed our seriously chilled bones at Dundee’s Bar & Grill in Seaside. Back in Portland, we tried to catch a concert at Doug Fir Lounge but settled for dinner, and grabbed a nightcap at the hipster-heaven Rontoms.

The following morning it was back to nature: the Columbia River Gorge. Well, after we brunched at Interurban (awesome food and such nice staff!) and randomly picked up fancy salts and chocolates at the cutest store ever, The Meadow. We enjoyed the mild autumn day among the vividly-colored leaves at Latourell Falls (a first for all of us) and Multnomah Falls, and surveyed the vast, gorgeous Gorge from Chanticleer Point. We closed the weekend at Bamboo Sushi – the first certified, sustainable sushi restaurant in the world – and the neighboring, fabulous Salt & Straw ice cream shop.

We bid Bob and Chris adieu on Monday morning, but it was a happy goodbye since we’ll see them again in a couple weeks in Arizona for Thanksgiving – thanks in part to our friends Genaro and Felicia offering to watch Cooper for the holiday.

Speaking of Mr. Cooper, he’s doing well – acting like the same ol’ Coop. He just finished his sixth of seven palliative radiation treatments with his cancer doc Dr. Cyman, one of only 83 board-certified veterinary radiation oncologists in the country – and a Michigan State grad! We’ll get an update after his last treatment on Tuesday, but the latest prognosis wasn’t fabulous: inoperable osteosarcoma, which meant our best bet was palliative radiation treatments to ease the pain and try to keep him around for up to a year. Let’s hope his sunny attitude and young soul help push that life expectancy out a bit! 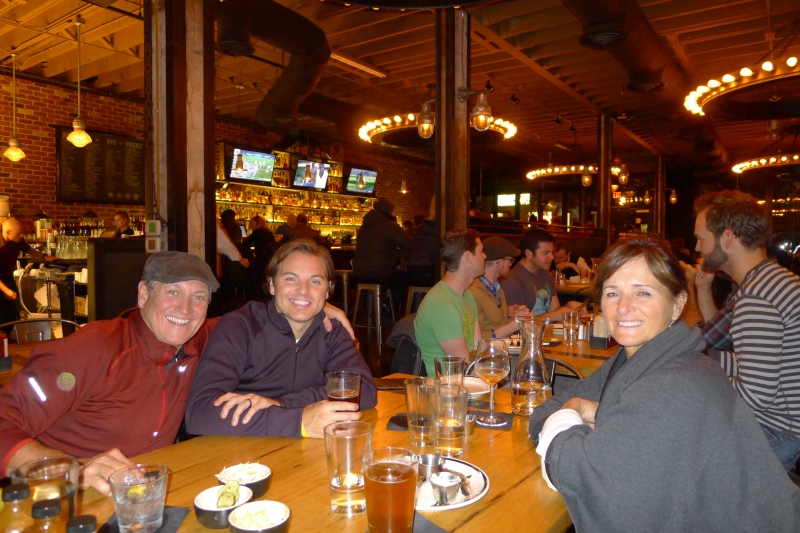 The Starks (look at those twins!) and the Krasses trotting to Deschutes Brewery 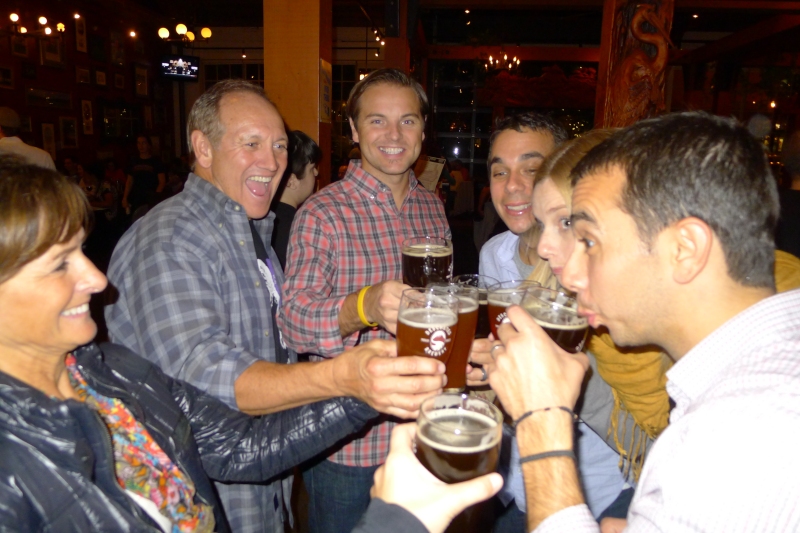 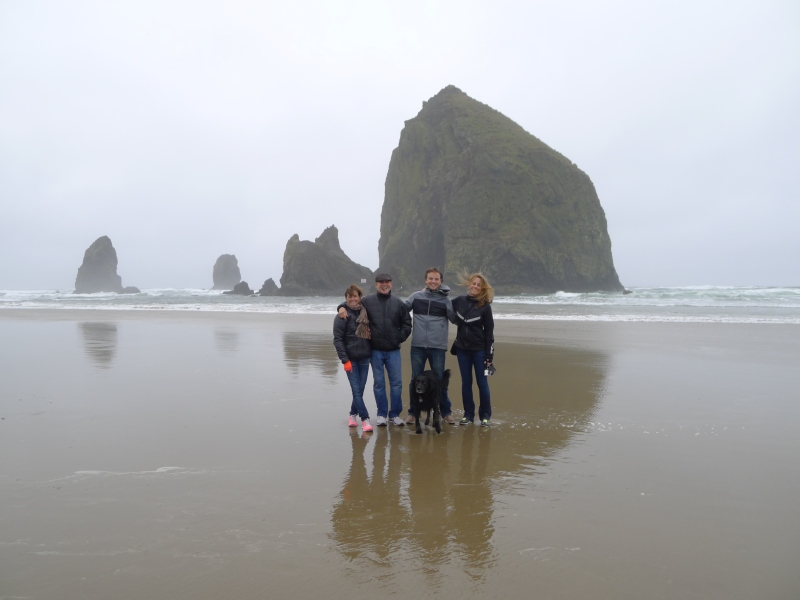 Bob and Jeff taking in majesty of Haystack Rock 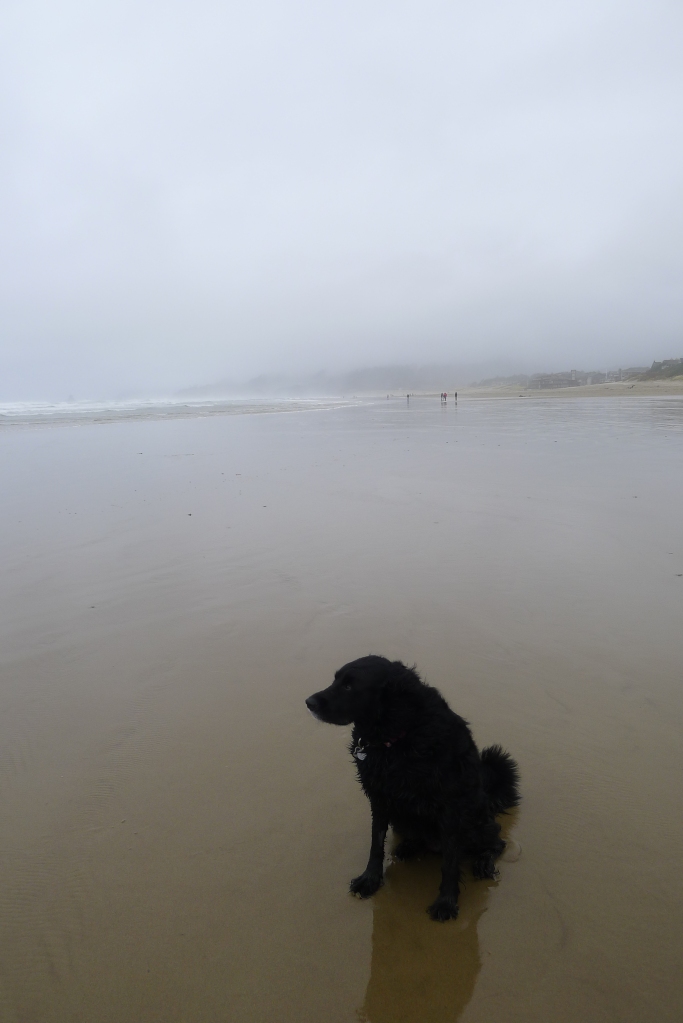 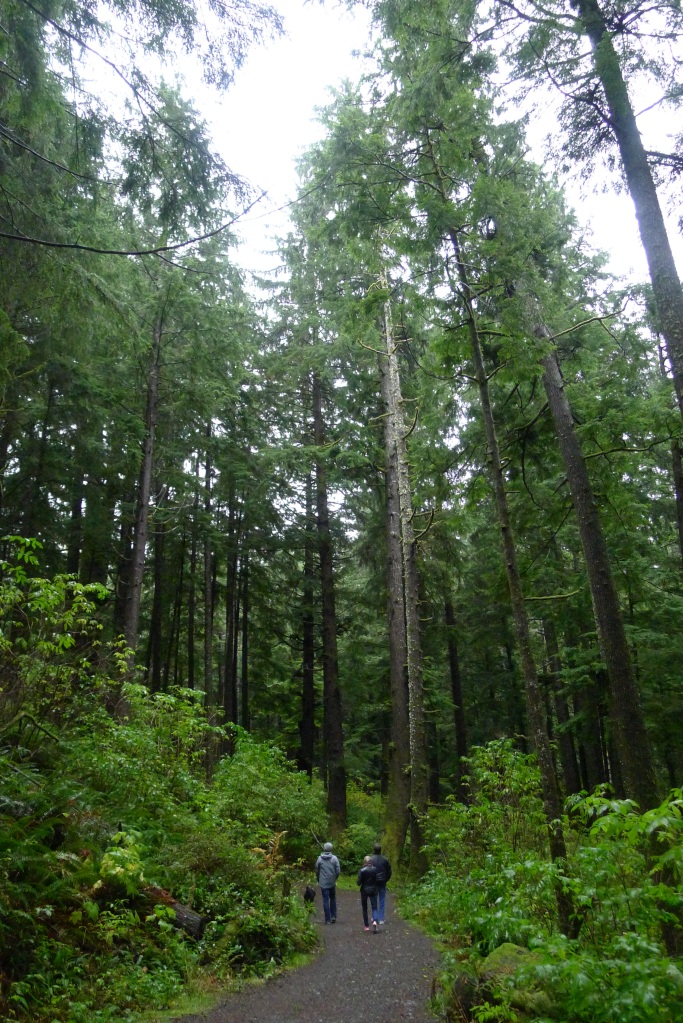 Me and my reflect-o jacket inside a fallen tree trunk

Jeff and Cooper peeking through the trees

Crossing the Short Sand Creek on a swaying bridge 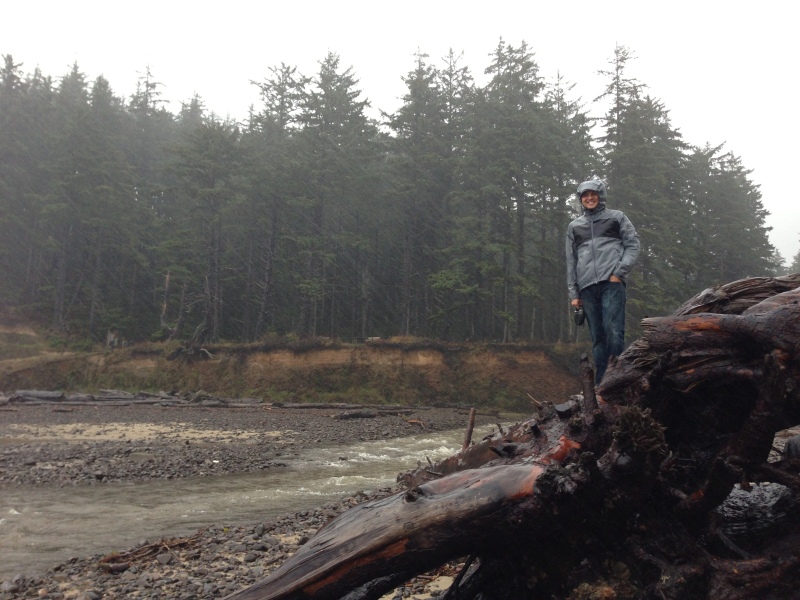 Picking out the daredevil surfers dotting the ocean

Jeff, Chris, Bob and Cooper posing in the rainstorm

The start of a fabulous day! 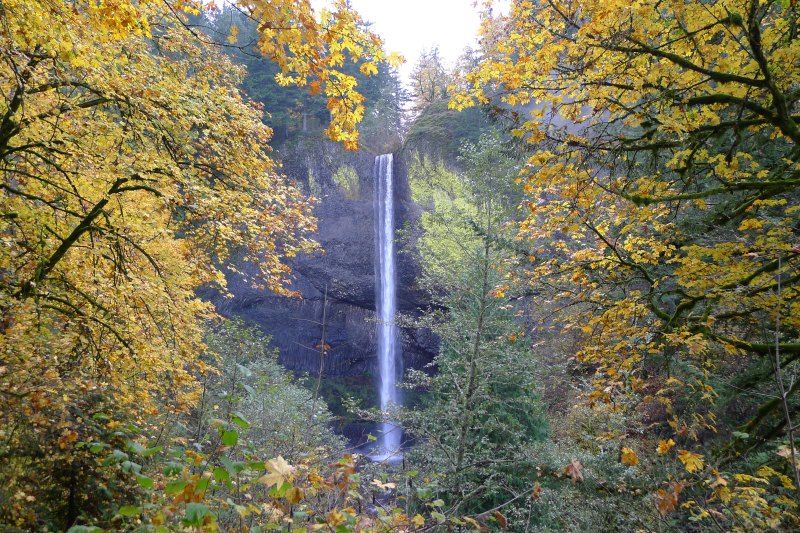 The 249-foot plunge of the Latourell Falls 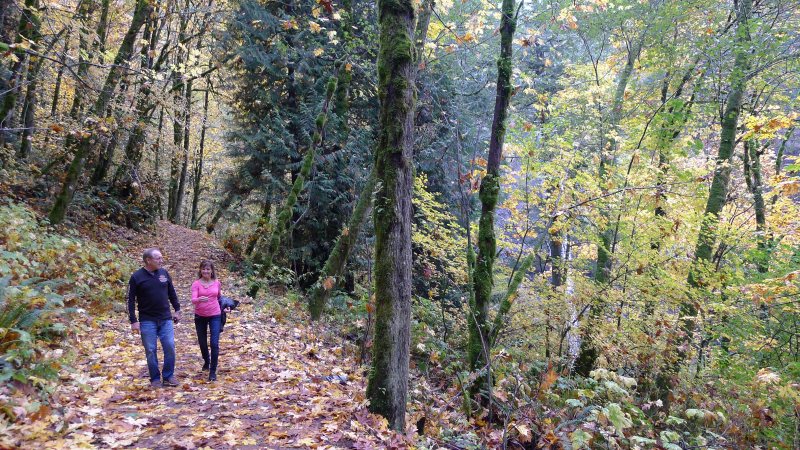 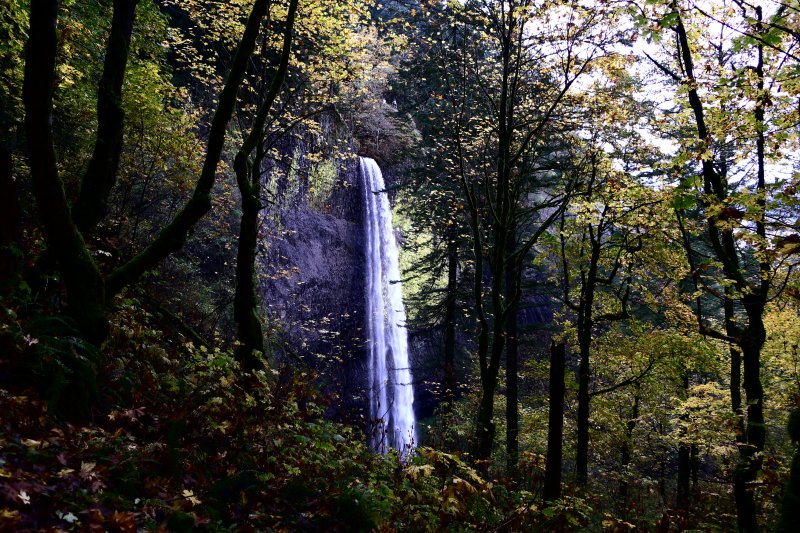 Latourell Falls from the trail 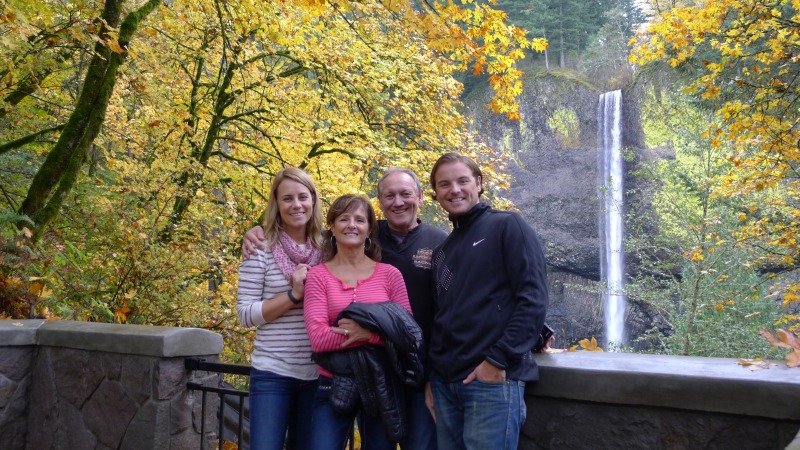 Our old friend, the Multnomah Falls 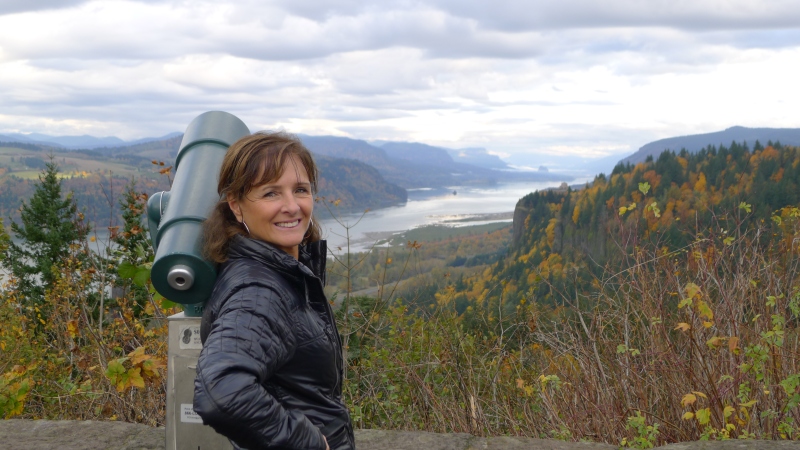 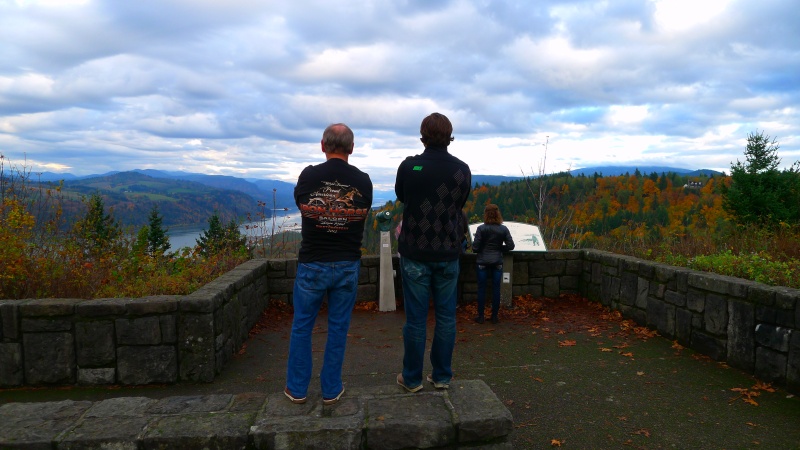 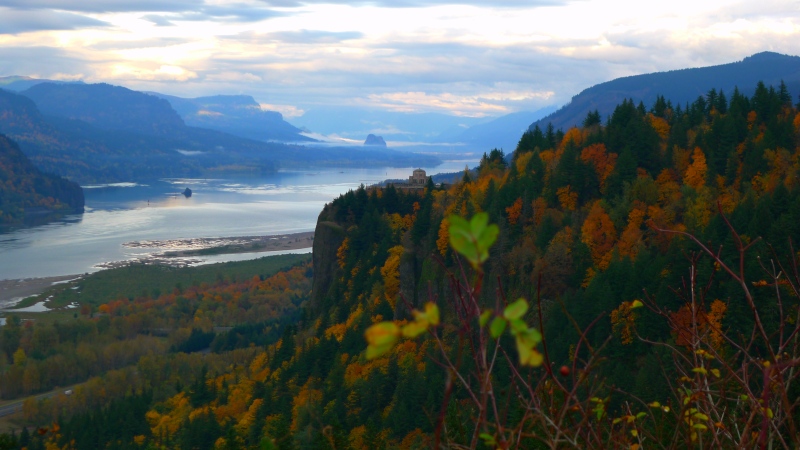 A look at Vista House, which we tried to visit but the roads were closed… 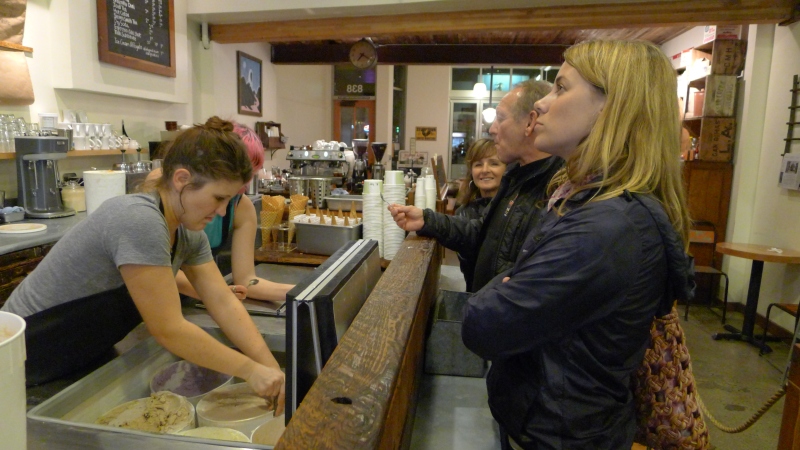