It’s a girl weekend here. That’s right, “girl,” as in singular – just me! Jeff, his bro Rob, his dad, and family friend Mr. M. picked the gustiest, rainiest weekend of the year for a guys’ weekend at Bandon Dunes Golf Resort, home to four of America’s top golf courses, on Oregon’s southern coast. I thought about getting a visitor out here but I didn’t get around to it, so it’s just Cooper and me holding down the fort – oh, and I’m keeping an eye on the Stark kitties until Daniel and Lindsay get home later today.

The spread at Broadway Books

Even through this soggy, chilly, gray Saturday makes me want to burrow into my couch and watch girly flicks like “Like As We Know It” all day, I managed to put on some non-pajamas and do a little book shopping. Lounging and reading books somehow feels more productive than lounging and watching cheesy TV, plus I’m also lagging on my 2013 goal to read at least 35 books. So book shopping it is.

Almost everyone has heard of Powell’s Books, the largest independent new and used bookstore in the world. It’s on a million “top things to do in Portland” lists, and yes, it’s mega-big and cool. I just haven’t gone to any other local bookstores ’round town, and I was determined to change that.

I started my outing at Title Wave Used Bookstore, which sells discards from Multnomah County Library’s collection. Staffed entirely by volunteers, the shop in Northeast Portland has about 20,000 used books and other materials for sale for bargain-basement prices. I picked up three books for a grand total of $4.50: “This Beautiful Life” by Helen Schulman, “Slow Love,” by Dominique Browning, and “Room” by Emma Donoghue, plus a compliment on my purse from the friendly older woman working the counter. Score!

My next stop: Broadway Books, a cozy independent bookstore nestled in a Northeast Portland strip of stores since 1992. I was close to grabbing one of the many Portland food, hiking, biking or travel books in the “Northwest” section, but settled on “Orange Is the New Black” by Piper Kerman – which happens to be a new-ish Netflix original series.

I made a quick pit stop at Cartopia food cart pod for some grub. There were some major electricity outages in the Hawthorne area – I guess from the crazy winds – so many of the carts were out of commission, and had attracted a small news crew from a local station. Since fries apparently require no electricity, I ordered a small carton of PB and J fries, topped with peanut satay sauce and a smokey chipotle raspberry jam, from Potato Champion. Mmmm…messy goodness.

I ended my excursion at Bingo Used Books on Powell Street. Holy piles of books. That place was  jam-packed with ’em. And VHS tapes and a bunch of other used stuff. It was a little overwhelming. I think Title Wave skewed my expectations for prices on used books, because Bingo was fairly more expensive. Somehow I ended up with a big photo-filled book on Spanish architect Antoni Gaudí, whose work Jeff and I admired on our honeymoon in Barcelona four years ago.

Has anyone read any of these books? (Major bonus points if someone read the Gaudí book!) I hope I picked up at least one good egg in this batch. Now it’s time to get to it!

Dreary view outside my front door

Open, bright space inside – and lots of cheap books!

Old gray-beard in the back during my travels

Broadway Books, on – you guessed it – Broadway Street

Shelves and shelves, books and books 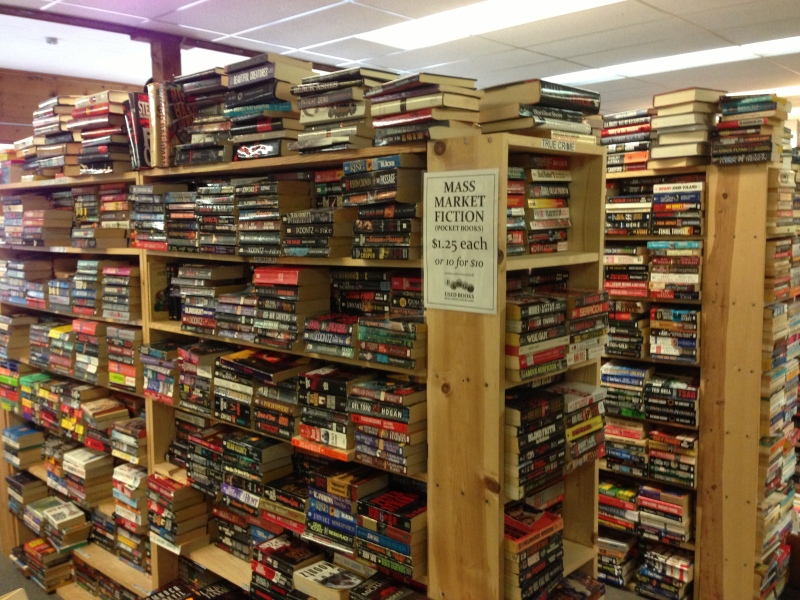 Stacks and stacks of paperbacks

My pile of loot from the day

Marie and Louie, my little buddies in the apartment next door