We all know couples who just make sense together. Somehow, something brings together two people whose interests, quirks and personalities just fit, and you can’t imagine a better match in the world for either of them.

That totally applies to Jerry and Chrissie, recent transplants to Dallas and long-time friends of ours. Jerry and Jeff met in grade school, and I got to know Jerry when we all lived in Chicago. Jerry first spotted Chrissie across the room at a fashion show in the Windy City, and in no time their coupledom was solidified. Well, no surprise, they got engaged last January, and for months Jeff and I eagerly awaited their Oct. 26 wedding in Indiana.

In our standard fly-east practice, Jeff and I hopped a red-eye Thursday night and touched down in Indianapolis at 9 a.m. Ah, our old home Indy! It’s our first visit back since we drove away from our Broad Ripple bungalow in Dec. 2010. Joey and his girlfriend Maureen (Mo) had flown in from O.C. the night before, and they scooped us up in a rental Ford Edge and we cruised over to my former haunt, Cafe Patachou, for brunch and Bloody Marys.

The four of us made another airport run to nab Clint, a Brooklyn-based photographer and a Brighton High classmate of Jerry, Joey, Jeff and their buddies. Our carload made its way to the Greenwood Mall to pick up the guys’ tuxedos, and we quickly succumbed to the lure of the Applebee’s bar across the hall. Hours passed, and more groomsmen picked up their tuxes and joined us for a beer. Before we knew it, the whole crew had to hightail it to the wedding venue for the rehearsal. (And yes, by this time Jeff and I were still unshowered and slightly loopy from our brief night’s sleep on the plane.)

Roughly an hour and a half outside of Indianapolis is the picturesque Brown County, one of America’s original artists’ colonies. Chrissie grew up in the area, and she and Jerry chose the Abe Martin Lodge in Brown County State Park for their big day. The rustic lodge, named after a clown-like character that cartoonist Kin Hubbard created more than a century ago, offered everything we needed for the weekend: a restaurant, indoor water park (which no one used), game room, cabins, and ceremony and reception spaces.

Jeff waiting for the festivities to begin

After a rehearsal dinner at Salt Creek Golf Retreat down the road from the state park, we returned to the lodge game room for some gummy worms, Lay’s Garlic Cheesy Bread Potato Chips, Big Buck Hunter, air hockey and covert beers. Before long, a DNR trooper kicked everyone out, and the party moved to a family cabin onsite.

We awoke the next day to ideal sunny, crisp weather for a fall wedding. Jeff and the other wedding party people met in the early afternoon for photos, and the other dates and I caught up with them at the outdoor ceremony under the vivid yellow trees. It was a picture-perfect setting and super sweet wedding, complete with a reading of lyrics from Queen’s “You’re My Best Friend” and heartfelt officiating by Chrissie’s family friend, Jeff. And how amazing do Jerry and Chrissie look? Seriously. And check out the fancy footwear on the guys; Jerry, a Puma salesman, outfitted himself and his groomsmen with classic black sneakers. (Of course Jeff felt a little uneasy having to wear another brand for an afternoon.) 🙂

The reception reflected the newlyweds’ penchant for music. Two DJs started spinning tunes quickly after dinner, and the sprawling Melodeon Hall transformed into a clubby dance party, complete with psychedelic light show. At one point, the fire alarm somehow went off and firefighter Neal nearly got arrested for taking charge of the situation. Silly, over-excitable me drank entirely too much vodka (blegh), teaching me that beer is much more my speed. Weddings like that get me so amped up, because there are so many of our favorite people together in one place. The Chepys, MoJo, Jerry and Chrissie, the Meislings, the Mains, Doug and his parents…what an amazing crew of friends we have. I also met Sarah and groomsman Drew, a sweet couple from Grand Rapids who share a ton of mutual pals with us.

It was a wonderful night, an awesome weekend in the woods, and I can’t be happier for Jerry and Chrissie. 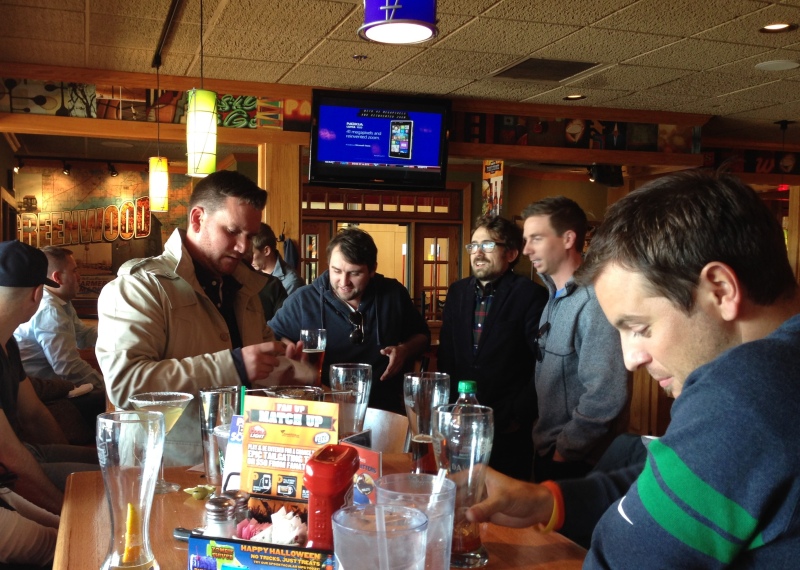 Jeff and newlywed Neal at Applebee’s

The site of the nuptials: Abe Martin Lodge in Brown County, Indiana

Our home for the weekend: Schuyler Wiggins Cabin 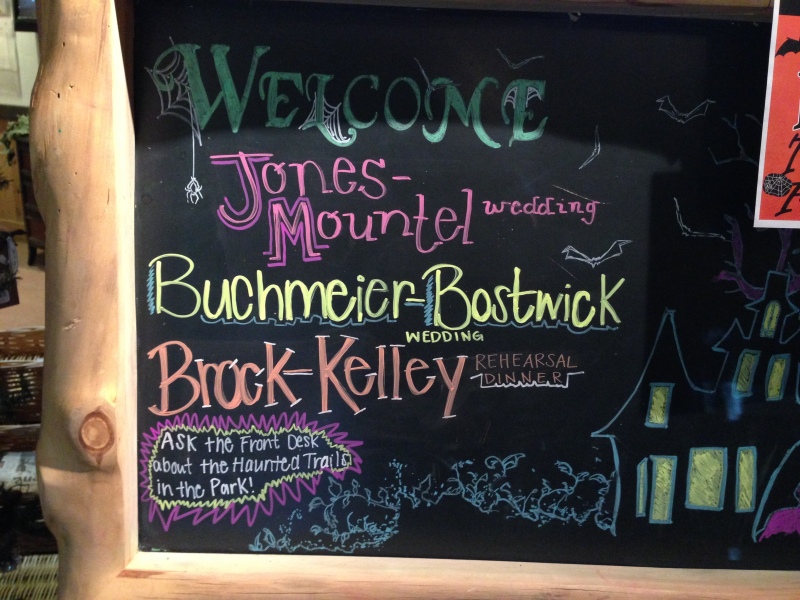 Let’s get this party started! 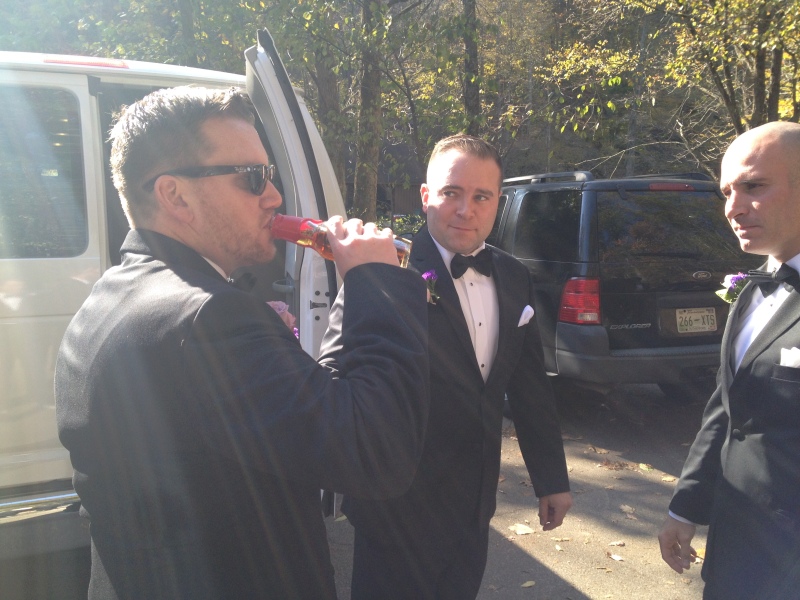 Chris and the groom, Jerry 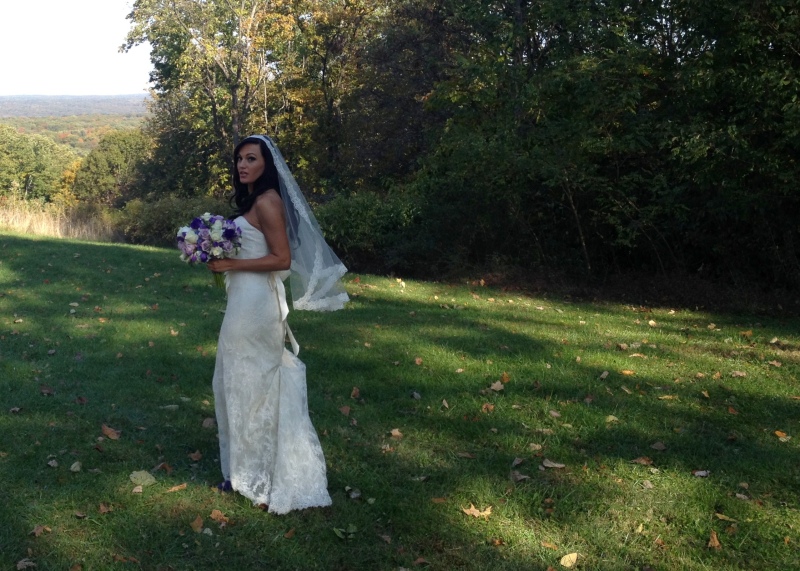 Jeff walking down the aisle with Julie, Jerry’s sis 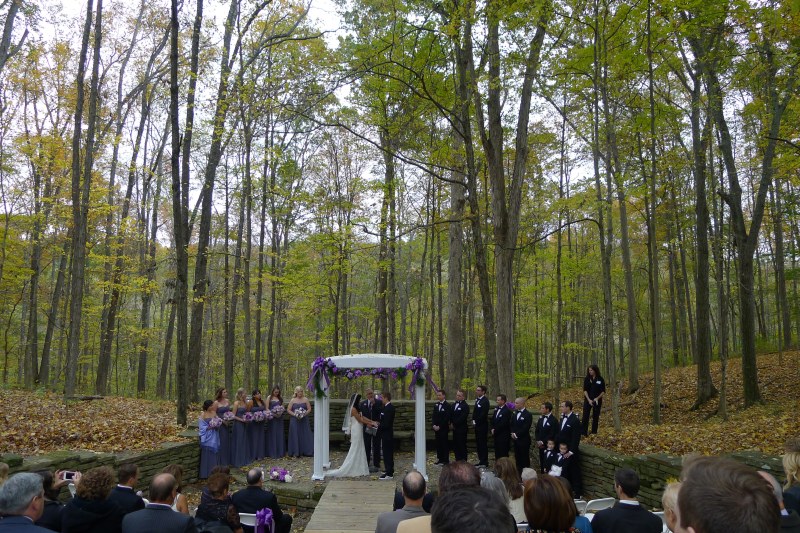 How pretty is this backdrop? 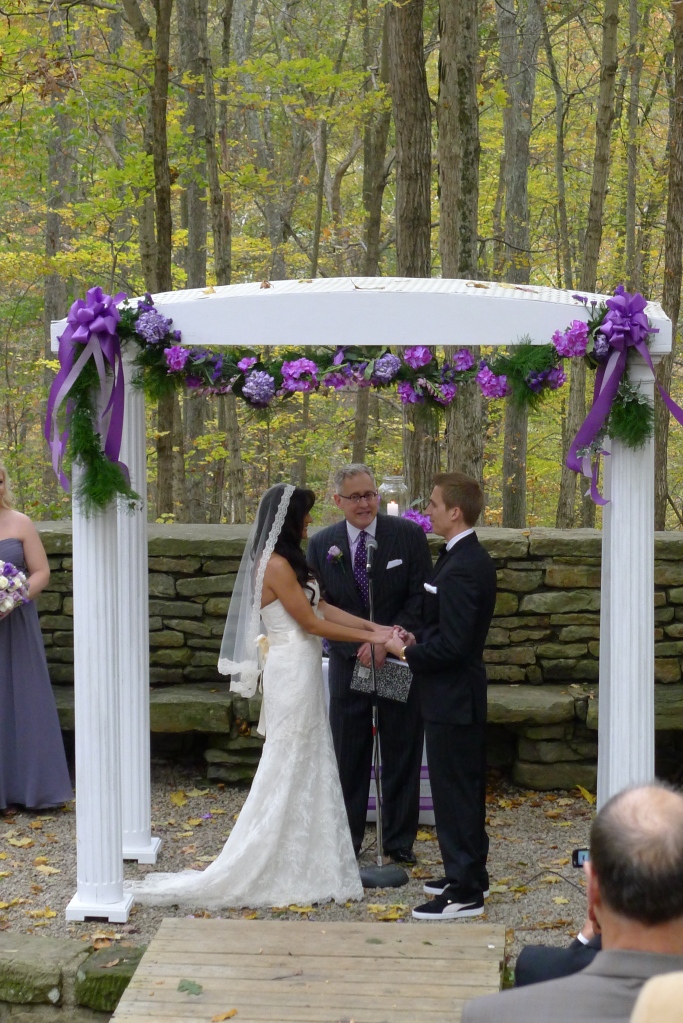 Jeff the officiant asking Jerry and Chrissie to recite their vows 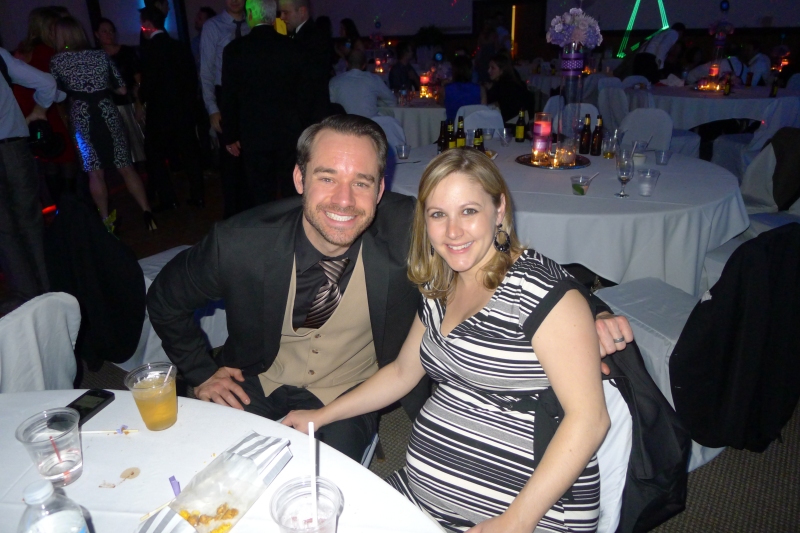 The adorable Chepys, getting close to baby time!

Doug raving at the post-party at the family cabin