Of course, the weekend after two straight weekends of travel (Arizona and SoCal) couldn’t be chill – nah, that’d be much too practical. And it was the nicest weekend in Portland since September 2011, so everyone was itching to get out and do something, anything.

For me, the weekend was bookended by plenty of girl time. Friday, Nike peeps Kristen, Nicole, Keeley and I hit Beaverton Mingo for happy hour before sneaking some Bota Box individual wines into Titanic 3D. Oh, Rose and Jack get me every time!

Welcome to TEDxPortland! (Notice the hundreds of pencils sticking out of the X)

On Saturday, Jeff, Lindsay, Daniel and I hopped the streetcar at 8:30 a.m. and headed to the Pearl District’s breathtaking Gerding Theater for a day of TEDxPortland. (Mind you, we were grumbling all the way since it was a rare sunny, warm day and we were spending it inside like we were in college or something.) The theme of the event: “Unchartered Territory,” honoring Lewis and Clark’s cross-continent journey that landed in Astoria, Oregon (where Jeff and I celebrated our second anniversary). A couple months ago the four of us hit the TEDxPortland launch party that prompted us to buy tickets to the actual all-day event, which promised 18 “TED talks” from leaders in technology, entertainment and design. Thankfully, TEDxPortland proved to be worth the time and money – it was interesting and an excellent dose of inspiration. Speakers included Portland Mayor Sam Adams, amazing 11-year-old Gavin Davison who started Seven Seven Skateboards company when he was seven, the inventor of wiki technology, and a striking final talk from Wieden+Kennedy director of strategic planning. Also, the guys from Uncage the Soul Productions unveiled their latest time-lapse photography project, the captivating Finding Portland (the follow-up to Finding Oregon). Organizers also sprinkled in some super cool digital talks that I totally recommend watching: one on Improv Everywhere and their stunts like the “No Pants Subway Ride,” a sketched talk on changing the education system, and a funny one on the power of vulnerability. Great event, and it’s made me a TED fan for years to come.

Sunday brought a “craft party” at Jessica’s place in Northeast. What a concept! A first for me, but it sounds like it’s common among some circles. Jessica’s friends Betsey, Lindsey and Kelley and I gathered in Jessica’s backyard to drink summery rum drinks, eat a light late lunch and paint terra cotta pots for plants. It was a beautiful day, and it was an excellent opportunity to meet some super-interesting girls – and Lindsey’s now a new recruit for our book club!

Can you find Jeff, Daniel and Lindsay in the crowd?

In the art gallery area of TEDxPortland

The hostess with the mostest, Jessica (who was so excited to be able to bust out a big hat) 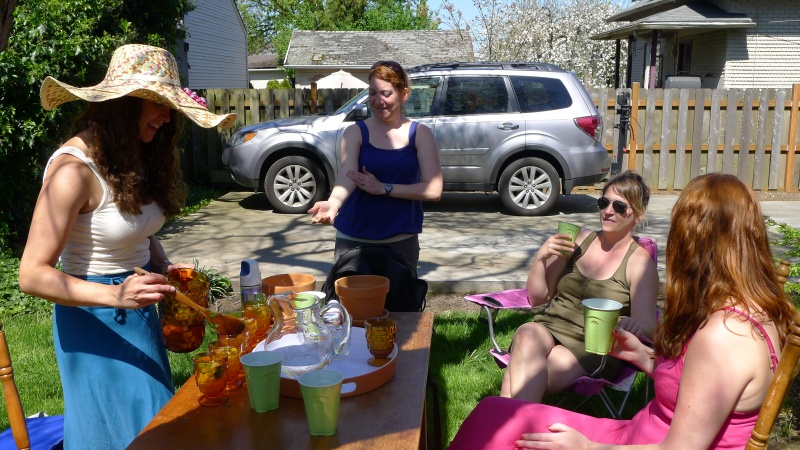 Guess which pot is mine?